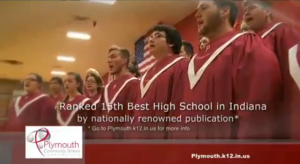 As the new school year gets closer and closer many districts are preparing their teachers and buildings for another nine months of learning. But in the northern part of the state, three school districts are trying to market themselves through local media to encourage students and their families to enroll in their public schools.

The South Bend Community School Corporation, Plymouth Community School District and School City of Mishawaka are all running some sort of media campaign promoting the district’s schools in hopes of encouraging families to stick with their public school option.

The advertising campaigns come after an updated report from the Department of Education released earlier this month that shows students living in the South Bend and surrounding communities are using more and more choice scholarships to attend private schools. In just four years the number of students living in the South Bend school district using the scholarships increased from 371 in 2011-2012 to 2,224 in 2014-2015.

And this is a trend happening in many large, urban areas in the state. As the state’s voucher program gains popularity, private schools are seeing an increase in enrollment while public schools are struggling to keep students in their classrooms.

Which is why school districts in the northern part of the state find themselves budgeting money for advertisements.

The Mishawaka Schools paid more than $1,600 to run a three-week radio campaign promoting the schools in their district. The district hired a private marketing firm to help create the spots, which promote the flexibility of programs throughout the district.

Tricia Harte of WNDU in South Bend writes that Plymouth schools used a television ad to advertise their district:

“The intent of our advertisement is to share our success stories and educational opportunities that we have and continue to offer to young people,” says Plymouth High School Principal James Condon.

Condone says the push to solicit new enrollment isn’t a competition between schools, it’s a challenge to individual districts to tighten up and offer the best education possible.

As for how much the commercial cost PCSC, Tyree said “if our recruiting efforts gain us two transfer students, we more than paid for our investment.”

Plymouth also plans to survey families that decided to transfer to Plymouth Community School Corporation and identify how they heard about PCSC being the right choice for their needs. At this point, a representative for PCSC says they cannot definitely say the numbers increased due to the television spot. However, the numbers for transfers compared to last year have increased.