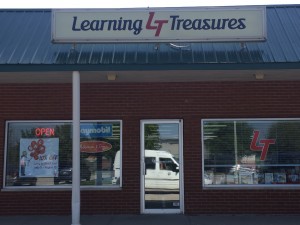 Learning Treasures, a teacher supply store in Bloomington, offers a 10 percent discount on all materials the month before school starts to give teachers spending hundreds of dollars out of pocket a break. (Photo Credit: Claire McInerny/StateImpact Indiana)

When most of us start a new job, we don’t typically buy hundreds of dollars worth of office supplies for our colleagues and ourselves. In fact, most of us would be outraged if that were expected. But teachers essentially do just that every school year.

Continuing our series on first year teachers, we look at how much it costs for a new teacher to start their classroom and stock it with the educational materials they’ll need.

It All Adds Up

In Teacher’s Treasures, a teacher’s supply store in Bloomington, Sara Draper is picking out the pocket chart she will use as a calendar in her second grade classroom at Helmsburg Elementary School in Brown County.

It’s her first year teaching, so she has not only a blank slate but also blank classroom walls she needs to fill with educational posters and materials. And that comes at a price.

A calendar is just one of the things on Draper’s shopping list this summer. She also needs to get borders, letters, and decals for her bulletin boards and games for indoor recess. And she’s paying for it all out of pocket.

“My birthday is Aug. 8 so I’m probably going to ask for supplies for my classroom,” Draper says. “I mean, it’s like, I need a lot of stuff.”

Out of pocket spending is nothing new for teachers, but over the last five years the amount they spend has increased dramatically. The national average for teachers’ out of pocket spending is around $500. As state funding for schools continues to not be enough for big expenses like salaries, repairs and transportation, money allocated for classroom materials falls by the wayside.

StateImpact polled 108 teachers about how much they spend each year out of pocket on educational materials. It’s a non-scientific poll but shows the most teachers who responded either spend on average between $400 and $500 or more than $1,000.

Supplying a classroom from scratch

For first year teachers, it’s often much more because they are starting with nothing.

Gabe Hoffman, who’s teaching at Nora Elementary in Indianapolis, has spent most of his graduation money on furnishing his classroom.

And because so much of his personal money is going to the classroom, Hoffman is living with his parents in Indianapolis this first year to save money.

Chris Conway is in a very different situation in his classroom at Riverside Intermediate in Fishers.

“I got really lucky since I was here last semester there were quite a few teachers that left and since they knew me they left me a lot of stuff,” Conway says. “So that really helped me out, because if I wouldn’t have gotten all this stuff left to me, I can’t even imagine what I would spend.”

As Conway walks around his classroom, he points out all the materials that were donated to him that he would otherwise have to buy.

Back at the teachers supply store, Sara Draper finishes up her shopping trip, just one of many she’ll make this summer.

The total for a few borders and letters for her bulletin board as well as the calendar supplies: $71.58.

As Draper pays for the supplies, Patricia Basa, the storeowner of more than 30 years, says within the last ten she’s seen the trend of teachers spending hundreds of dollars on educational materials get worse. Rather than capitalizing on that, she gives the teachers a break.

The Indiana General Assembly did pass a law this year giving teachers a $100 tax credit in an attempt to reimburse them for out of pocket spending. The federal government also issues a $250 tax credit for K-12 teachers.