If you are an experienced cook, you know that if you omit key ingredients, certain dishes just won’t come together.

The same can be said for schools: without key components, they won’t work. And Indiana schools are coming up short on one very crucial part of the mix.

We’ve reported before about shortages of substitute teachers around the state – and not surprisingly, the group of Hoosier educators as a whole is also on the decline. 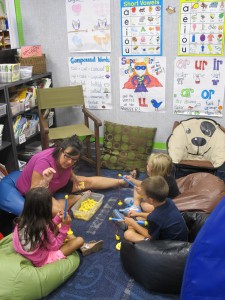 The number of licenses the state issued to first year teachers in 2013-14 dropped by more than 60 percent from the 2009-10 school year. (Photo Credit: Rachel Morello/StateImpact Indiana)

According to the most recent data available from the Indiana Department of Education, the state issued 6,174 licenses to first-time teachers in the 2013-14 school year. In 2009-10, that number sat at 16,578.

That means the number of initial licenses issued has dropped by 63 percent.

It’s important to note that teachers need separate licenses to teach individual subjects, so this doesn’t mean the number of teachers has dropped by the same margin. The IDOE issued licenses to about 5,599 teachers in 2009-10, and in ’13-14 that number sat closer to 4,500.

This doesn’t surprise Gerardo Gonzalez, outgoing dean at Indiana University-Bloomington’s School of Education, who says he thinks the state and the country as a whole are headed for a teaching crisis.

“We’ve always had shortages in some fields, like math, science, special education, English as a second language – but now we’re starting to see shortages across the board,” Gonzalez explains. “I think the nation is headed that way unless we do something.”

Gonzalez attributes the declining number of applicants for teaching jobs to a lack of good pay.

“Teaching has never been a very lucrative position, but people can make a very good life doing something they care about and they can make a whole lot of difference in people’s lives,” Gonzalez says. “I think we need to set up the salary scales to show that teaching is a priority, that it’s a critical profession not just for local communities, but for the nation.”

Gonzalez adds that he also thinks the societal perception of teaching needs to change in order to get people to stick with the profession long-term.

“We also need to recognize the valuable difference that good teachers make, and make it a more prestigious profession, not constantly criticize teachers,” Gonzalez says. “We have students here at Indiana University who could have gone into any profession. They have straight A’s, they’re motivated, bright young people, and yet they have to fight the social perception that they’re only in education because they couldn’t get into some other program.”

The Associated Press spoke with John Quick, superintendent for the Bartholomew Consolidated School Corporation, who pointed out an interesting correlation among the shortage, state education policies and districts’ hiring processes:

…[S]chools across the state that lost millions when the General Assembly changed the school funding formula have enticed older, more experienced — and more expensive — teachers to retire early, replacing them with younger, less expensive colleagues.

Quick said that when schools can replace teachers who earn $70,000 with those who earn $40,000, they can use the difference to give raises to the remaining staff.

Gonzalez agrees. He says Indiana has implemented some education-related policies that make it difficult to attract and retain teaching talent.

“Indiana, in many ways, has been ground zero for education reform…you have a constant barrage of policies that are designed to get people out of teaching,” Gonzalez says. “So what we have in Indiana is veteran teachers – effective teachers – leaving the profession because they’re tired of dealing with the very negative policy climate, and then younger people, particularly the high academic ability, talented people that we need in teaching, choosing other professions.”

Specifically, Gonzalez cites what he calls “wrong-headed, ill-informed” practices such as incorporating student test scores heavily into teacher evaluations, as well as the General Assembly’s decision to untie pay raises for teachers who work toward their masters degree or other higher-level academic training.

Enrollments in various teacher preparation programs around the state have fallen in recent years, according to numbers obtained by the Associated Press. Ball State University has seen a 45 percent decline in participation in its elementary and kindergarten programs, and Indiana State University sees 13 percent fewer graduates from its College of Education.

Teresa Meredith, president of the Indiana State Teachers Association, says teacher prep programs may be shrinking because of a change in state credentialing policies.

“You have to get a content degree first, then add the teaching piece,” Meredith explains. “So you won’t go into the education program until near the very end of your college experience.”