Education just became a much bigger part of the 2016 race for Indiana governor. 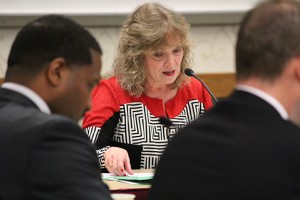 State Superintendent Glenda Ritz announced her campaign for governor at an event in Indianapolis Thursday morning. The educator spoke first at Ben Davis High School, followed by a series of appearances scheduled around the state, according to her Facebook page.

Ritz’s announcement has excited many of those who supported Ritz in her 2012 run for the state’s schools chief  – but others say the former librarian and first-term executive official is stepping outside her wheelhouse.

How can the lifelong educator translate her experience into a campaign?

Fortunately for Ritz, many experts say education is a topic that can be used as a platform to talk about almost anything – from economic development to public safety and beyond. Since education affects so many things, having that as the backdrop to her campaign could be an asset for her.

“In the world of politics, we sort of tell candidates, answer the question you want to answer, not the question that was asked,” says Andrew Downs, director of the Mike Downs Center for Politics at IPFW. “For her, the challenge is to be able to pivot back to education and use that as the platform for discussing those things that she doesn’t necessarily have a background in.”

Another fact some say works in Ritz’s favor: education impacts everybody. Whether you’ve gone to school or you haven’t, that affects the rest of your life. You might have children in school. If you aren’t a teacher yourself, you probably know a teacher, or have interacted with your children’s teachers. So some say the fact that Glenda Ritz can talk knowledgeably about an issue that touches every single person in the state of Indiana is a benefit to her as a candidate.

At her campaign announcement Thursday, Ritz said she thinks her job and background position her as the candidate most in touch with Hoosiers.

“I need to have the big focus on education to actually connect it to the economy,” Ritz said. “Education is the catalyst to move the economy forward. We [have to] have that close connection to make sure that that happens. I see my role as governor to be sure that happens to make Indiana move forward.” 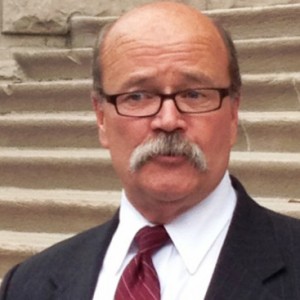 Ritz is joining a group of heavy political players on the Democratic ticket – both a former House speaker and gubernatorial candidate, John Gregg, and a current Indiana lawmaker, Sen. Karen Tallian, D-Portage. Although these players certainly have the advantage of a wide range of experience over Ritz, Downs says that could be spun into a positive for the superintendent, as well.

“There’s no doubt that whether it’s Tallian or Gregg, they can talk about their breadth of experience, that is an advantage for the two of them. But when it comes right down to it, voters are in some respects looking to the future and not necessarily to the past,” Downs says.

Additionally, neither Tallian nor Gregg has ever held an office in the executive branch: Ritz has. Neither of them has ever won a statewide election, either. Not only has Ritz done so, she still has a strong group of supporters who have stuck by her ever since. 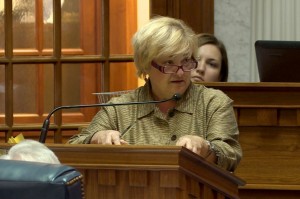 “This is still arguably the biggest hurdle Ritz will have to overcome, having less experience and expertise outside the education arena,” says Indiana statehouse reporter Brandon Smith. “It’s very possible, however, that it will affect her more in the General Election, if she makes it there, than it will in the primary.”

The superintendent herself seems quite aware of her position relative to her opponents – she alluded to that fact at her announcement Thursday.

“You’re going to see that I actually have quite a bit of knowledge and experience in a variety of areas,” Ritz told reporters. “As my campaign unfolds, you’ll see a great many topics. I plan to talk to Hoosiers all over the state of Indiana to gather input.”

Past examples do exist of people who found themselves in a similar position to Superintendent Ritz – politicians who have held a statewide position while running for higher office.

Another example: Tim Berry, a former state treasurer who ran for and won the position of state auditor back-to-back.

It’s no secret that Ritz and the supposed Republican incumbent, Gov. Mike Pence, have not always gotten along. It’s arguably been the stickiest point for Ritz in her current position – many of the state’s lawmakers backed the governor in some of his attempts to reduce some of her power. In addition, the superintendent has butted heads in the past with members of the State Board of Education, an important policy group that she heads.

Downs says those relationships will likely come into play for Ritz in not only the primary, but a potential general election campaign as well. But there is a way she can leverage the experience in her favor. 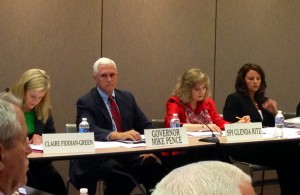 “She can simply try to make the case to everyone that her position had been the correct one,” Downs explains. “Very little in government is done with unanimity, and so we sort of expect people to have differences of opinion. She can chalk those things up to differences of opinion, and try to make everyone believe that her position was the correct one.”

Ritz will retain her positions as superintendent – the head of the state Department of Education – and chair of the State Board during her campaign. And Downs says many are curious to see how ‘Ritz the candidate’ handles the responsibilities she’ll continue to hold as ‘Ritz the superintendent.’

Reporters questions Ritz on the duality of roles at her announcement Thursday: can she do both jobs at the same time?

“You betcha!” Ritz responded. “I was elected by the state of Indiana to be the Superintendent of Public Instruction, and that’s exactly what I’m going to be doing.”

As for Governor Pence, its doubtful that relationship will become any rosier now that he and Ritz are officially opponents. There’s little doubt the Governor’s offensive moves would point to the conflict he’s seen with Ritz, the IDOE and the INSBOE. Ritz, on the other hand, can now move beyond education when criticizing the governor.