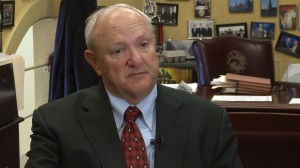 Budget leaders in both the state House and Senate continue to advocate for dumping the ISTEP+ as the state’s assessment and replacing it with a nationally crafted test as a cost saving measure for the state.

As we’ve reported, the State Board of Education is in the process of approving a new test for the 2015-2017 school year. The current price tag from the Department of Administration, who selects bids from testing companies, is $134 million.

But Sen. Luke Kenley, R-Noblesville, doesn’t want to take the route of creating a new test tailored specifically to Indiana’s standards, which is why he wrote Senate Bill 566.

If signed into law, SB 566 would allow Indiana to use an already created national test in future school years rather than hiring a testing vendor to create the ISTEP+.

Before Indiana chose to leave Common Core standards last year, it was part of the Partnership for Assessment of Readiness for College and Careers (PARCC), which would have provided a national test. But when Indiana left that consortium to write its own standards, the state also had to write a test that tested the new standards.

Scott Elliott writes for Chalkbeat Indiana that this law would mean a lot of changes over the next few years, including making a choice on if we want to keep the new standards as is:

The bill wouldn’t completely unhinge the Indiana Department of Education’s plan to hire to British-based Pearson to create a new ISTEP test to fit Indiana’s new academic standards for next year. But it would give Pearson’s version a short lifespan — the bill would direct the department in 2017 to adopt a test used by other states, like the Iowa Test of Basic Skills or a test created by the Northwest Evaluation Association that some Indiana schools already use to prepare kids for ISTEP.

But supporters of keeping ISTEP, or at least sticking with state-led process for writing Indiana’s exams, include several key players. Gov. Mike Pence and House Education Committee Chairman Robert Behning, R-Indianapolis, are among those who have been cautious about the proposals in Senate Bill 566.

Behning quizzed Kenley about whether a test like NWEA was the right kind of exam to be used for A-to-F grades and other accountability measures. Kenley acknowledged today’s NWEA exam would need to be altered, but he said he was assured by the organization that was not difficult or costly to do so.

Another option would be to make small changes to Indiana standards so what the state teaches would better match tests in use in other states.

“It appears testing across the country is evolving into a more synthesized activity,” Kenley said. “They are more like each other than they have been. There’s a good chance you don’t have to rewrite Indiana’s standards.”

SB 566 passed through the Senate and is being considered by the House education committee.