Thursday marks the end of the testing window for part one of Indiana’s statewide test – but the focus at the State Board of Education meeting that same day looked even further into the future of ISTEP+.

Quick reminder: the contract with current test vendor CTB-McGraw Hill expires at the end of this school year – and it’s been a relationship riddled with controversy.

In addition, the state is still in the process of transitioning the ISTEP+ test into an era of new academic standards. The assessment Hoosier students are currently taking is the first to test the Indiana Academic Standards, and education leaders hope to further refine that test in the 2015-16 school year and beyond.

Earlier this week, the Indiana Department of Administration selected vendors to administer parts of the ISTEP+ through spring 2017. They estimate the total cost for those contracts at $38 million.

This number concerns some state board members, including state Superintendent Glenda Ritz, who expressed shock upon receiving the IDOA’s information Wednesday.

“The Department of Education learned of the awards and the astronomical costs of the assessments after this process had been completed,” Ritz said in a statement. “I strongly believe that Indiana needs a streamlined system of assessments that come at a reasonable cost to taxpayers.” 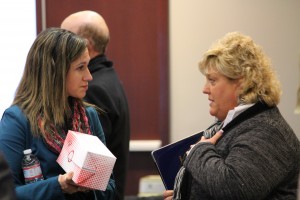 Although she says she agrees the test should be cost-effective, board member and Avon elementary school teacher Sarah O’Brien says the estimate should not have come as a surprise.

“My understanding was that we were aware that these numbers existed where they were from the time of the initial [Request for Proposals], which was back in October,” O’Brien tells StateImpact.

O’Brien also says she’s worried components will be included in the test that aren’t mandated by law, which could prevent students and taxpayers from getting the best ‘bang for their buck.’

“I support testing, but I support responsible testing,” O’Brien says. “I think it’s important that if we’re doing it, we’re doing it right, and we’re making sure that it’s the most effective use possible.”

“We’re already in a climate where we need to be changing the general mindset towards assessment, making sure that we’re viewing it in as positive a light as possible and ensuring that it is able to do what it needs to do for our students and our schools,” O’Brien adds.

Although vendors have been selected, their contracts will not be awarded until any appeals have been addressed. The due date to submit an appeal is March 18.

CORRECTION: A previous version of this story incorrectly identified the price tag for the ISTEP+ test at $133 million. That is the estimated cost for the state’s entire assessment system, including ISTEP+,  IREAD-3, End of Course Assessments, etc.