Indiana’s State Board of Education meets Thursday – the same day the testing window closes for Part One of this year’s ISTEP+ assessment.

Testing will likely be a major talking point throughout the day. The Department of Education plans to request the board extend the window for Part Two to give schools more flexibility in administering the test. 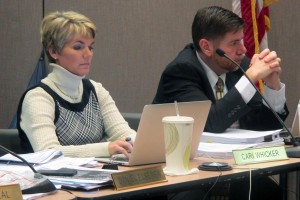 You’ll remember there was quite a bit of hubbub in the weeks leading up to the test this winter. Concern from school leaders and parents over the length of the new exam led Governor Mike Pence to hire outside consultants to help the SBOE take steps to make cuts for time. The Indiana General Assembly approved those changes just days before students could start testing.

The board will also discuss the future of the ISTEP+. The IDOE announced Wednesday that the state’s Department of Administration had selected vendors to administer parts of the test through spring 2017.

Here’s a quick look at what else is on the docket:

A-F Appeals: When the board first attempted to approve 2014 A-F school accountability grades back in October, requests from a handful of schools unsatisfied with how their grades had been calculated halted the process. Since then, board members have tried to figure out a way to streamline the appeals process. They plan to vote on a resolution Thursday.

NCLB Waiver: Public comment is currently open on the draft of Indiana’s application to renew flexibility from aspects of the federal No Child Left Behind law, due to the U.S. Department of Education March 31. The state received an extension in last renewal cycle – but not without a dose of drama. Indiana had been targeted by the feds early last year for not doing enough to put “college and career ready” academic standards in place, and the state’s waiver placed on conditional status.

Gary Schools: IDOE leaders will update the board on its progress improving schools in the Gary Community School Corporation. The board may also specifically discuss the district’s Dunbar-Pulaski Middle School, a school that has received six F accountability grades – typically the point at which the state takes over.

Arlington High School: Continuing what has been a months-long process, Indianapolis Public Schools will present a detailed plan for how to run Arlington. The state took over the struggling school in 2012, but the turnaround operator they chose alerted them last summer that no money remained to keep the school going. If the board approves the plan, IPS would operate the school under board jurisdiction.

Those interested may watch the board meeting live online beginning at 9 a.m.