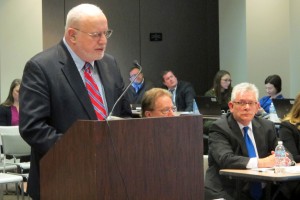 Two national testing consultants – hired through an executive order Gov. Mike Pence issued this week – presented five recommendations to the State Board of Education Friday of ways to reduce the length of this year’s ISTEP+ test.

Edward Roeber and William Auty presented their recommendations during an emergency SBOE meeting that State Superintendent Glenda Ritz called after parents and educators expressed outrage at the length of this year’s test.

After reviewing this year’s ISTEP+, Roeber said the increased times came from one section.

Ritz and the board agreed to move forward with Roeber and Auty’s recommendations, which they say will shorten the test by three hours and five minutes:

1) Release only a small portion of the open-ended test items: When students take the ISTEP+ test, some of the questions are posted online after scores are posted to be used as practice or classroom preparation for the test. Those items have to go through an “operational test” (the actual, graded test students take) so the Department of Education knows they are effective. Since this year’s test is new, every question must be tested by students – whether it’s used in the part of the ISTEP+ that counts toward a student’s score or the “field test” (the part that’s goes back to the IDOE for data purposes). By not releasing every question after the fact, we get to save some of them for next year’s test. This is crucial, because questions for spring 2016 must be piloted this year.

2) Don’t give all of the questions to every Indiana student: The biggest reason this year’s ISTEP+ is so much longer is because the field test is being included in the operational test. That’s because there wasn’t time to field test the new types of questions and content before this spring. Roeber says this isn’t necessary, and that the IDOE could break the test up into a “core” section – a group of test items that every student will take – and “sample” items, which are divided among the school districts in the state. So rather than having every student take an identical, longer ISTEP+, they will all take a different version of the assessment while still effectively piloting every item.

3) Pilot test the deleted open-ended questions in the fall: Moving some of the items that need to be field tested to a different part of the year alleviates the amount of testing student endure this spring,

4) Remove the Social Studies test for fifth and seventh graders for one year: Assessing social studies is a state requirement, not a federal one, so if approved by the General Assembly the IDOE could suspend this for one year to alleviate the test lengths. Board members were mostly in favor of this, saying social studies education is important but the goal of shortening the ISTEP+ takes precedent this year.

By reducing the test to around eight hours, Roeber says Indiana will be administering a test that’s around the same length as other state tests or Common Core aligned tests being used throughout the country.

He expressed concerns that making these changes before the Feb. 25 testing window will leave room for error if the changes aren’t communicated to schools properly, but Ritz says she will make sure that is not the case.

“Communication is the key to what we’re going to be doing. Making sure that everybody is aware of the reduction of the time and what that involves for their particular school and their particular students,” Ritz said.

A representative from CTB-McGraw-Hill, the state’s test vendor, said making these changes in the amount of time given is possible. The IDOE, CTB-McGraw Hill and the testing consultants are meeting Friday afternoon to figure out how to make these changes happen with both the online and physical versions of the test.

For recommendations one, two and four to happen, the General Assembly must make changes to current laws to move forward. Ritz says the IDOE will start communicating with the legislature today to hopefully get action started Monday when they reconvene.