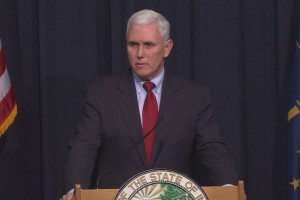 Governor Mike Pence signed an executive order Monday to hire a nationally-recognized assessment expert to advise the state on how to shorten the 2015 ISTEP+ test.

The announcement comes after outcry from educators and parents when the Department of Education released timetables for this year’s ISTEP+ last week, showing the amount of time students will sit taking a test had doubled from last year. The consultant, yet to be chosen, will review the new test and make suggestions to the governor’s office, the IDOE and State Board of Education on how to make it shorter.

“Once we receive these recommendations to shorten the ISTEP+ test, we’ll be calling on the State Board of Education and the Indiana Department of Education to work with our vendor to implement these changes immediately in time for this spring’s test,” Pence says.

This year’s ISTEP+ length comes as a side effect of pulling out of Common Core and writing new state standards. Since it’s a brand new test, the state’s vendor, CTB McGraw-Hill, and the IDOE are including a significantly higher number of questions to assess the validity of the test.

Pence said it was the State Board of Education’s fault that this pilot is included in the actual test, instead of delivering it this fall as a practice. He blames the board’s inability to work together for the delay in putting pilot questions forward.

Daniel Altman, a spokesperson for State Superintendent Glenda Ritz, says Ritz is not in favor of the longer test but feels she had no choice but to move forward with this option.

The testing window for this year’s ISTEP+ begins Feb. 25, giving the consultant exactly two weeks and two days to come up with a plan to shorten the test.