The Indiana Department of Education has reached a $3 million settlement with test vendor CTB/McGraw-Hill, after technological glitches interrupted state standardized tests in the 2012-13 school year. 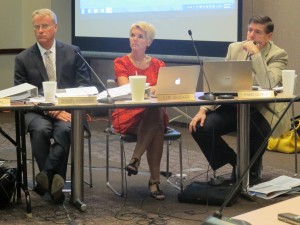 State Board of Education members Dan Elsener (left), Cari Whicker and Brad Oliver listen to updates on the state's settlement with CTB/McGraw-Hill.

State Superintendent Glenda Ritz announced the terms of the settlement at Wednesday’s State Board of Education meeting. CTB officials told board members they had reached the agreement with Ritz’s agency in October.

Under the terms of the settlement, CTB will credit Indiana around $450,000 toward developing a new contract. In addition, the state will get $2.9 million in credit for in-kind products and services from CTB.

Board members voiced their surprise at the information. Brad Oliver said this was the first he had heard of the settlement, and that he didn’t remember discussing the topic as a group. He likened the situation to a moment at last month’s meeting, when the board questioned Ritz’s transparency regarding submission of amendments for the state’s No Child Left Behind waiver.

“How can we work well together when we get these surprises?” Oliver asked. “Rather than seeing this pattern of finding out after the fact, can’t we just talk to each other?”

“I’m not fighting with the superintendent, I’m pleading with her,” Oliver later told StateImpact. “Her ability to give us accurate, timely information and our ability to make decisions together serves our kids far better than the path we’ve been on.”

Problems with CTB’s servers caused a series of computer glitches that interrupted online testing twice in the spring of 2013. Thousands of students were kicked off or locked out of their exams in April, forcing the state to postpone testing until May and making many people question the exam’s validity.

An independent reviewer concluded the interruptions did not have a substantial impact on overall student performance.

Indiana extended its testing contract with CTB for the 2014-15 school year, and the company is already developing a new assessment to match the state’s new academic standards. However, Indiana will have an open bid to operate student testing beginning in the 2015-2016 school year.