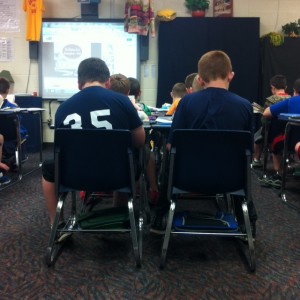 The interest in public single-sex education has increased in recent years, as more pressure is placed on schools to graduate students, improve test scores and keep teaching methods fresh.

More than 200 public schools across the country offer single-sex classrooms, according to the National Association for Single Sex Public Education. Indiana even has a couple of schools that are specifically all-boys or all-girls.

But not everyone is a fan of this system. As our counterparts at StateImpact Florida have reported, the American Civil Liberties Union recently came out against single-sex schooling in parts of their state. Indiana is one of 15 states the ACLU has sought documentation from related to implementation of single-sex programs in the state.

SINGLE-SEX: TESTING IT OUT

Single-sex classes were implemented at Riverview Middle School in Huntington, Indiana about eight years ago. Administrators noticed a significant gap between boys’ and girls’ test scores in language arts: about 84 percent of female students regularly achieved passing scores on the English portion of the ISTEP+ exam, compared to only 65 percent of males.

Gender gaps such as this are not unusual for Indiana schools. As we reported earlier this school year, young girls typically score as well or better than boys on the ISTEP+ tests. In contrast, Indiana high school girls score lower than their male counterparts on Advanced Placement tests and most sections of the ACT and SAT exams.

Riverview Principal Curt Crago worked with his language arts teachers to separate classes for boys and girls. The strategy has paid off: everyone’s scores have improved, and the gender gap has shrunk on the school’s state standardized tests.

And the intervention stuck. Sixth and seventh graders at Riverview still spend two periods of their day in same-sex language arts classes. It’s the only subject boys and girls take separately.

“It’s what we do at Riverview, it’s no big deal,” said teacher Cari Whicker. “It’s what’s best for us, and for our data and for our kids.”

Although the research is mixed, some studies suggest students learn better when separated from the opposite sex. The U.S. Department of Education found in a review of educational research that single-sex schooling can be helpful. Most studies reported positive effects for single-sex schools on all-subject achievement tests. However, the study found no general impact on long-term indicators of academic achievement or socio-emotional development.

Many proponents of single-sex education, including staff at Riverview, cite scientific evidence that boys’ and girls’ brains are hard-wired differently. Research has proven some group-level differences between the sexes. For example, girls tend to develop quicker verbally, and boys typically outperform girls in terms of spatial skills.

But according to Dr. Lise Eliot, associate professor of neuroscience at the Chicago Medical School for Rosalind Franklin University, these differences are very small statistically, and are not substantial enough to warrant separate lessons.

“There’s really no good evidence that boys’ and girls’ brains work differently, learn differently, think differently, see differently,” Eliot says. “Most data shows that the more boys and girls have an opportunity to interact and have the same opportunities in general, the more similar they end up.”

Challenges to the legality of single-sex programs have been another common complaint. Although coeducation has been the norm for most of U.S. history, increased interest in public single-sex programs prompted legal guidelines for implementing single-sex classrooms in recent years.

A provision in the No Child Left Behind Act, enacted in 2002, allows school districts to use program funds to support same-sex schools and classrooms. Subsequently, in 2006 the U.S. Department of Education published amendments to the Title IX regulations. The revisions now outline exemptions for specific types of classes that may be segregated by sex, including those constituting “remedial action.”

Single-sex schools and course offerings are allowed as long as enrollment is voluntary, and programs of “substantially equal” quality are provided for the excluded sex.

Despite these safeguards, some opponents liken single-sex classrooms to the “separate but equal” classrooms of the 1960s, which the U.S. Supreme Court eliminated 60 years ago this month,

“We pretty much abhor racial segregation in schools, but nobody seems to appreciate that gender works in much the same way,” Dr. Eliot explains. “Basic social psychology tells us that segregation promotes stereotyping and sexism, and so it does not seem like the way forward in today’s society.”

In a complaint lodged recently against Hillsborough County Public Schools in Florida, the American Civil Liberties Union alleges the district’s noncompliance “based on the discredited notion that boys and girls learn and develop so differently that they should be separated and taught differently.” According to the complaint:

“By training teachers that boys and girls learn differently, and teaching girls and boys differently based on expectations about the talents, capacities and preferences of each sex, the District has created a hidden curriculum that is harmful to all students…Girls are taught mathematics in a way that makes it less abstract and consequently gives girls the message that they are not good at abstract mathematics. Boys are taught literature in a way that makes stories highly concrete and fact-based and does not encourage them to connect with characters’ emotions. These sex stereotypes limit opportunities for boys and girls alike.”

But it’s precisely that ability, to tailor curriculum and teach to students’ strengths, that Cari Whicker says is one of the greatest aspects of her single-sex classes. She is able to gear her curriculum to the sexes in order to make their reading, writing and grammar skills stronger. For example, in a recent unit about the oceans her boys’ class read I Survived a Shark Attack and the girls read I Survived the Titanic.

“You try to find things where you can find a common connection so the grade level as a whole feels some continuity, but at the same time you fill a niche that’s more interesting for that group of kids,” Whicker says.

“THE WORLD IS NOT GENDER-BLIND”

Riverview teacher Jill Spenner says she and her colleagues are looking out for the best interests of their students, academic and otherwise.

“We want our kids to have the best of both worlds,” Spenner continues. “They get to speak up, they get to voice their opinions, they get to discuss matters and themes that mean the most to them. It’s very empowering to both genders.”

“Sooner or later, you’re going to be in high school or college or the workplace with people of the other gender,” Eliot says. “I believe what’s happened is that in our attempt to be gender-fair, we’ve gone to a gender-blind approach. And the fact of the matter is, the world is not gender-blind.”

For the students, being separated doesn’t seem like all that big of a deal. In fact, they see the program as having some real social benefits.

“You can talk more in common,” agrees Wilson Whicker, 12. “I wouldn’t talk to [a girl] about video games!”

Both Daas and Whicker have seen their English test scores improve since last year. They agree that language arts is different than what they’re used to, but both say it’s their favorite class.