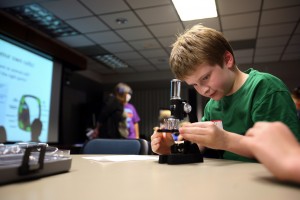 Indianapolis will share $1 million with the other winners to develop a STEM mentoring pilot program.

The White House named Indianapolis as one of its winners in a national competition for STEM mentoring, acknowledging the city as a leader in science, technology, engineering and math education.

Indianapolis was one of seven cities selected for the US2020 City Competition, which challenged communities with developing plans to connect STEM professionals with students in their region. The initiative is a response to President Obama’s goal of getting more students engaged in STEM subjects.

Indianapolis will share $1 million in financial, consulting and staff support with the six other winners over the next year to help launch its local plan.

In response to the announcement, Indianapolis Public Schools Superintendent Dr. Lewis Ferebee tweeted that the school system is “committed to this citywide movement.”

For every skilled STEM worker in the state of Indiana, there are currently 2.4 existing science, technology, engineering and mathematics jobs, according to a recent study by Change the Equation.

Indianapolis Mayor Greg Ballard said in a statement that innovative and effective STEM education is important for local students, who are potential members of the city’s workforce, to close the skills gap.

“One of the best ways to lift the economic fortune of our city and its residents is to adequately prepare them for the careers of tomorrow,” Ballard said. “Creating a climate that is attractive for businesses to retain, create, or relocate jobs to our city is dependent upon our ability to supply the skilled workers employers demand.”

The city’s initiative aims to engage specifically girls, underrepresented minorities and children from low-income families – those considered most commonly underserved in STEM subjects.

“A commitment to serving those students classified as ‘underserved’ should be a priority for our city,” said David Becker, President and Chief Executive Officer of First Internet Bank, another local partner. “We are excited to support programming and community activities, like those present in Indianapolis’ US2020 plan, to identify and nurture tomorrow’s scientists, technicians, engineers, and mathematicians.”

Indianapolis’ plan aims to inspire more students to pursue STEM college and career pathways. During the pilot year, the plan will focus on increasing the supply of STEM professionals interested in mentoring K-12 students, and connecting them to hands-on STEM programming at pilot schools and community centers.

The TechPoint Foundation for Youth, a philanthropy organization focused on STEM programming, will serve as the city’s project manager.

Laura Dodds, TechPoint’s Executive Director, says the project will provide an opportunity for all stakeholders in Indianapolis to come together around the same table.

“Our plan consists simply of connecting dots and removing the obstacles that often prevent cross-sector collaborations of this scale from being successful,” said Dodds.

Indianapolis was among 12 finalists selected from 52 nationwide applicants. US2020 announced the winners yesterday at the annual White House Science Fair.