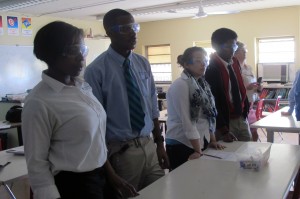 Private schools can’t accept new students if they get a D or an F from the state for two consecutive years, though they can keep the ones they already have.

But so far, there’s not a lot of research about how school letter grades impact parental choice.

“We don’t know a whole lot about kids using vouchers to attend schools that have been assigned grades in large part because a lot of the schools that offer vouchers do not have an A-F accountability system in place,” says Indiana University researcher Ashlyn Nelson.

Students in Andy Mundell’s class at Indianapolis’ Providence Cristo Rey High School are learning how to measure pressure. He’s set up an experiment using sound waves and a metal pipe to show students how it’s done. 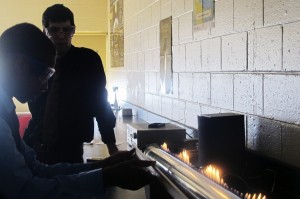 “I saw it on YouTube a couple of years ago,” says Mundell, switching on the gas.

“You guys can see here the pressure inside the tube is pushing the gas out of the tube,” says Mundell.

Mundell used to teach at a top-rated Indianapolis private school where less than 5 percent of students receive vouchers. Compare that to Providence, which only takes students from low-income families.

“For me, that was it,” says Mundell. “I wanted to work with a more challenging set of students.”

Another science teacher, Anna Sluka, came to Providence after switching from an industry job to education. She says she didn’t want to teach in a wealthy, suburban school district.

“I have children that are about the same age — teenagers,” she says. “My children have been given every opportunity and support you can conceive of in America today. I don’t think it’s fair that other children don’t have access to the same resources.”

Students often come to Providence one or two grades behind, but they’re expected to graduate and go on to college. That’s what attracted parent Susie Toles to the school. She felt it would be a good fit for her youngest child, JJ, now a senior.

“Sports were important to JJ, and I knew he’d be able to play, but to me, my main thing with Providence was their academics, their graduation rate, their preparation for college,” she says.

The small, private Catholic school focuses on connecting students with local businesses as part of its work-study program. That helps pay part — but not all — of their $12,000 tuition. Without Indiana’s voucher program and private donations, it would be out of reach for most parents.

But is the school any better than Pike High School, the school JJ left? In 2011, the last year he spent in public school, Pike received a C from the state. Providence Cristo Rey received an A.

Fast forward to last year. Pike received a B from the state. Providence Cristo Rey received a C.

As a private school, class sizes are small — only about 20 students — and that means one or two bad test scores can translate to a middling grade. As a result, scores for the past few years have been all over the map.

Nelson, who studies the economics of education, says that’s a problem for parents who are trying to pick the best school for their children.

“I think it just becomes too difficult for parents to be able to sort of parse out what exactly this information is telling them on a year-to-year basis if the grades are bumping around,” she says.

Nelson is opposed to state aid for low-performing voucher schools. She says there’s no reason Ambassador Christian Academy, which received an F last year, should be getting more than $2 million from the state.

But she says for middle-of-the-pack schools, it’s a more difficult call because parents are likely choosing for reasons that can’t easily be measured.

“The move to a school that isn’t necessarily better performing in terms of reading and math achievement is OK as long as the parent thinks that they’re still just enhancing the match between what their kid needs and what the school is able to provide,” says Nelson.

“A lot of it’s not rocket science. People who were leaving, choosing to leave, were unhappy in their former place, right?” says president and CEO Robert Enlowe. “People who were choosing are happier. This is what I think we’ve known for a long time.” 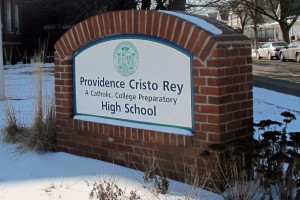 But other researchers say D and F schools also shouldn’t get to keep current voucher recipients.

“That is not only dangerous, that is detrimental to the academic experiences of those kids,” says Vanderbilt University professor Claire Smrekar. “That’s just waiting for the school to fail.”

“So we always talk about the reasons parents choose as the following: Quality, familiarity, proximity and safety,” says Smrekar.

For Toles’ part, she says she’s felt good about sending JJ to Providence each day for the past three years.

“Overall, even in his senior year, you’re still concerned about them when they’re in school,” she says. “I’m pretty confident, pretty certain he’s being looked after.”

And for some voucher parents, that peace of mind might be enough to make the switch.