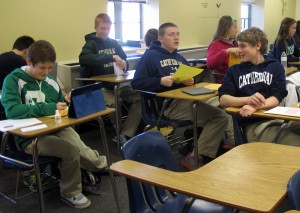 The number of students attending Cathedral High School in Indiana on state-funded tuition vouchers has increased from 18 in 2011-12 to 126 this year. Overall, 19,809 Indiana students received Choice Scholarships in 2013-14.

That’s according to a report released Monday by the Indiana Department of Education on third-year enrollment in the state’s Choice Scholarship Program. The state awarded 19,809 vouchers for the 2013-14 school year, up from 9,139 last year and 3,911 two years ago.

During the program’s first two years, income-eligible students had to have spent two semesters in public school or been awarded a scholarship by a state-approved granting organization to receive a voucher. As a result, about 90 percent of first-year voucher participants had spent time in a public school.

Two years later, the number of voucher students who previously attended public school has dropped to about 60 percent.

“So every student in Indiana is assigned an STN number,” says Fatima Carson, choice specialist for the Indiana Department of Education. “When these students apply for the Choice Scholarship, we’ll run that STN number through, and we don’t see a record of that STN number, that student, as having been in an Indiana public school.” 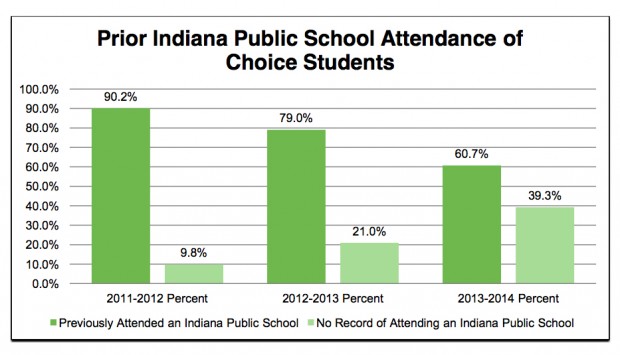 Fewer students are spending time in public school before becoming eligible for a Choice Scholarship.

The changes added 5,225 students to the Choice Scholarship Program who would not have qualified under the old rule requiring two semesters in a public school.

Indiana will pay an estimated $81 million in private school tuition this year, up from $15.5 million in 2011-12. The cost-per-voucher is slightly less than amount the state gives to public schools per student. Called the “Choice Scholarship Savings Distribution,” that pot of money totaled $4.1 million two years ago and $4.9 million last year.

“We’re now paying scholarships for this cluster of kids that we would never had paid any public funding for them to be in the public school,” says Carson.

It’s estimated half of Indiana’s roughly one million students are income-eligible for vouchers.

We’ll have more on third-year voucher participation as information becomes available from the IDOE.