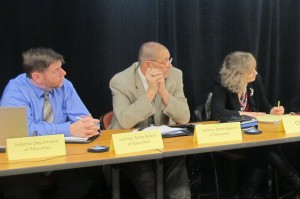 Indiana education officials are on track to approve new math and English language arts standards in April, albeit a little later than intended.

Proposed academic expectations were originally scheduled to go to the State Board April 9. But that meeting has been pushed back to give subject matter experts and outside reviewers more time to revise the standards.

A timeline posted to the Department of Education’s website Monday shows the draft standards are now on track to be approved sometime after the April 21 Education Roundtable meeting. That panel, which is co-chaired by Gov. Mike Pence and Supt. Glenda Ritz, must approve the final draft before it goes to the State Board.

The proposed standards draw heavily on the Common Core, as critics of the nationally-crafted standards are quick to point out.

Indiana education officials pushed back against criticism of the process during an update at the State Board meeting last week.

“People keep asking, ‘Why didn’t we start from scratch?'” says Indiana deputy superintendent Danielle Shockey. But she says the legislation that triggered the extensive review required the department start with the Common Core as a baseline for new standards.