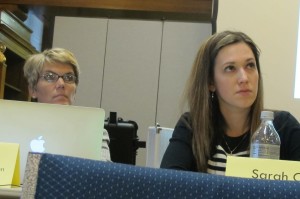 State Board of Education members Cari Whicker and Sarah O'Brien listen during the Indianapolis public meeting on academic standards.

It’s not often proponents and opponents of Common Core agree.

But speakers on both sides of the aisle told state education officials Tuesday at a public hearing in Indianapolis there are just too many proposed academic standards to teach.

Schauna Findlay is president of the Indiana Association for Supervision and Curriculum Development and reviewed the standards for the state’s pro-Common Core Chamber of Commerce. Findlay says the educator teams who developed the drafts have included more standards than teachers can get through in a year.

“Everything they said ‘this is a good standard’ was included in the draft standards without paying attention to have we now completely overloaded a particular grade level with additional content?” she says.

Findlay says in elementary math, Indiana has added a number of probability and measurement standards without subtracting anything.

“It’s not a viable set of standards,” Findlay says. “Teachers will have to pick and choose what they’re going to include because they can’t go to the level of depth they need to with every standard, which means kids will have disparate education and different gaps.”

Too many standards, writes Wurman, “ … the result of keeping almost all Common Core standards in this draft, and piling on top of them multiple additional standards.”

Hoosiers Against Common Core co-founder Erin Tuttle says her preference would be to go back to math standards Indiana education officials wrote in 2009.

“They had like 170 standards in K-8 mathematics,” says Tuttle. “Common Core has 345. Now we’re going up to these new proposed standards that have like 450 something standards.”

Tuttle says the proposed standards don’t go far enough in addressing the concerns her group had with the Common Core after its adoption in 2010.

“When you get to a point like this, with all the trouble, all the hassle, all the time getting us to this process where we’re finally going to have our own Indiana standards, you have to look at what complaints got you there and address those,” says Tuttle. “At least make one step closer to the other people.”

State Board of Education member Brad Oliver told StateImpact earlier this week the teams of K-12 educators and experts who drafted the proposed standards will meet again later this month to consider public comment.

“I hope they’ll take a look at the scope and make sure we’re not too broad, that we’re deep enough, and second, that we have a clear articulation between grade levels,” “Two things you’ll see them do,” says Oliver.

Oliver says there will also be an opportunity to add examples to the standards before they go before the State Board in April.