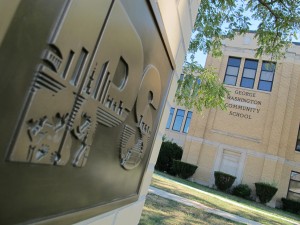 Indianapolis Public Schools is supporting a legislative plan that could increase cooperation with charter schools located in the district.

Indianapolis Public Schools superintendent Lewis Ferebee is taking heat for his support of a legislative proposal that would allow the school board to contract with outside management companies to turn around failing schools, writes Scott Elliott for Chalkbeat:

Under the bill, IPS can collaborate with an outside group in two ways. A charter school can operate independently within an IPS school building. Or IPS can hire an outside group to run an IPS school, creating what the bill calls an “innovation school” and giving it greater freedoms than other district schools.

Superintendent Lewis Ferebee said he needed the flexibility offered by the bill to execute strategies to improve some schools.

But the bill, which applies only to IPS, contains a provision that brought intense opposition from Indiana’s two statewide teachers unions — an outright prohibition of union bargaining for employees who work at “innovation schools” run under contract with the district. That provision was the main focus of those who spoke against the bill at today’s House Education Committee meeting.

Rep. Shelli VanDenburgh, D-Crown Point, blasted what she said was the bill’s “complete and utter disrespect” for teachers.

“You’re setting yourself up to lose a lot of good teachers,” she told Ferebee.

Elliott wrote earlier this week that Ferebee’s support of the proposal signals a new direction for IPS, which under former superintendent Eugene White fought to keep students out of charters within the districts’ boundaries. Ferebee says Rep. Bob Behning’s plan — it’s called a “portfolio schools” bill — gives IPS another tool it can use for improvement.

But on the Indiana State Teachers Association blog, the union disputes the bill’s characterization of agreements with outside management companies:

A key provision in HB 1321 creates what Rep. Behning calls “portfolio schools.” However, the bill sets up these schools to be essentially “takeover schools.”

Takeover schools are part of an initiative started by former Superintendent Tony Bennett in 2012. Bennett’s takeover school plan gives taxpayer money and other public resources to outside corporations who claim they can better manage schools deemed “failing.”

However, this method of helping these challenged schools improve has thus far been a failure itself. All five takeover schools that were taken over by private companies last year continued to be considered failing schools by earning a grade of F.

ISTA says the new legislation will leave teachers at buildings under contract with outside management groups without the protections of their previously-bargained contract.

A law passed in 2011 limits what teachers unions can bargain to wages and benefits.