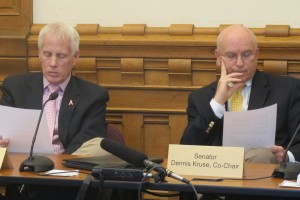 Senate President Pro Tem David Long and House Speaker Brian Bosma said this week said they would be keeping a close eye on the State Board and Superintendent Glenda Ritz.

They say they’re pleased at the recent progress state education officials have made to improve their working relationship. But that doesn’t mean they won’t still wade in on key education issues.

Bosma says after Wednesday’s State Board meeting, he’s happy with their progress.

“We’ve been chatting with everyone – the governor’s office, the State Board of Education members and the superintendent and her team – and it looks like everybody’s playing nice and moving in the same direction,” he says. “So that’s welcome news, I think, for all of us.”

“But we’re going to give a little extra guidance in a potential bill that we’ll try to pass this session so they clearly know the legislative intent,” he says.

Kruse says the legislature wants an independently-developed Indiana test and standards that, while similar to the nationally-developed Common Core education standards, will be better for Indiana students.