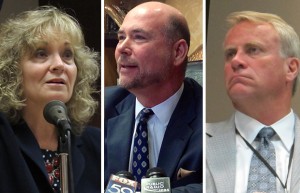 State lawmakers could wade into what Indiana Speaker of the House Brian Bosma called a “civil war” between Superintendent of Public Instruction Glenda Ritz and the State Board of Education.

Bosma says he’s hopeful the ongoing conflict can be resolved before the legislature has to act but that the General Assembly is willing to step in if necessary. He says he isn’t ruling out legislation that would strip Ritz of her responsibility as chairwoman of State Board.

But he says it’s less likely state lawmakers would try to make her job an appointed position.

“Because it just adds to the appearance that someone is trying to take someone away from an elected official due to political results and that is not the goal,” says Bosma.

But Senate Minority Leader Tim Lanane says he doesn’t think the legislature should get involved in the spat.

“You have only one official who is the Superintendent of Public Instruction, and I think we need to yield to that person and the authority that comes with that office,” says Lanane. “If that were to happen, I think this could all get worked out.”

If the situation does not improve, Bosma the legislature could take over adoption of new A-F school accountability measures and state education standards, the two big issues before the State Board right now.