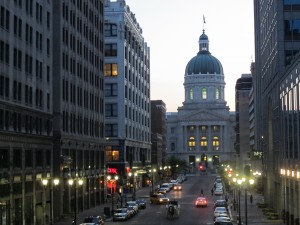 Looking down Market Street from the Soldiers & Sailors Monument at the Indiana Statehouse.

A proposed pilot program to offer preschool vouchers to low-income families in five Indiana counties would cost nearly $25 million per year if state lawmakers approve it, according to one estimate from General Assembly staffers.

Fiscal analysts at the Legislative Services Agency had estimated a very similar proposal the Indiana House passed during the 2013 session would have cost $7 million for 1,000 students.

The bill House lawmakers marked up Monday does not specify how many students could take part in the pilot program or which five counties would take part.

That may explain how the cost estimate tripled between last year and this year for two proposed programs that are practically identical.

Instead of the 1,000 students analysts predicted last year, analysts figured up to 4,600 students would take part in a pilot program — a figure that assumes state officials roll out the pilot program in the state’s most populous counties.

So $25 million may be a high-end estimate, but the number also serves to underline a point we’ve made before — state-funded pre-K isn’t cheap.