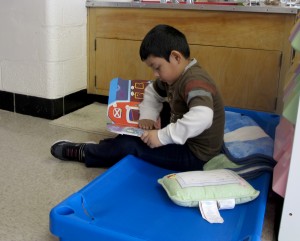 A student prepares for nap time at Busy Bees Academy, a public preschool in Columbus, Ind.

Indiana lawmakers’ attempt to create a state-funded pre-K program in this new legislative session will look a lot like their attempt at doing so last session.

The House Education committee is set to take up a bill Thursday that bears striking resemblance to a proposal the full House passed last year: Create a pilot program in five Indiana counties that provides scholarships for low-income 4-year-olds to attend preschool.

That idea didn’t pass muster with the Senate Education committee last year. Lawmakers in that chamber scaled back the proposal over concerns with its cost, which was then estimated at $7 million annually for 1,000 students.

Skepticism about pre-K’s potential cost remains. But pre-K vouchers gained a powerful public ally this fall in Gov. Mike Pence — and the question is whether his support will be enough to turn the tide.

The bill lawmakers will take up Thursday — which House Education Committee Chair Bob Behning, R-Indianapolis, filed earlier this week — doesn’t specify how many students could receive vouchers and doesn’t hint at how much the program would cost.

But the eligibility requirements are similar. As in last year’s proposal, 4-year-olds from households with incomes of up to 185 percent of the federal poverty level would be eligible to receive the scholarships. They could use that money at certain eligible childcare providers that have earned national accreditation or a 3 or 4 on the state’s rating scale for childcare providers.

There are a few differences from last year’s proposal.

This year’s proposal would also require pre-K providers to formally assess whether students who enroll using vouchers will leave their program ready to enter kindergarten.

To do this, a pre-K provider would likely give students a state assessment called the ISTAR-KR. That’s an assessment many Indiana special education providers already use to measure young children’s academic proficiencies in math and language arts, along with their socio-emotional and physical health.

Under the bill lawmakers will consider Tuesday, if under 70 percent of students pass a kindergarten readiness assessment in two straight years, the pre-K provider would no longer be eligible to receive vouchers.

Because lawmakers are proposing the begin the voucher initiative as a pilot program, it appears the proposal’s pricetag would be significantly cheaper than the $50 to $100 million we were guesstimating for Pence’s plan — we based the estimate on the potential of at least 12,000 students signing up.