StateImpact moderated a community conversation with state superintendent Glenda Ritz on March 6. Ritz speaks about the IREAD-3 following the 18:30 mark in the video.

Glenda Ritz is no fan of Indiana’s requirement that third graders pass a reading test — she made that clear on the campaign trail, citing it as the last straw that spurred her to run for the state’s top elected education post.

Since her election, the state superintendent has kept up her criticism of the IREAD-3 exam. While proponents say it’s a linchpin of a reading policy that’s about much more than the test, Ritz says she wants to dump both the current IREAD-3 and the rules effectively requiring districts to hold back students who don’t pass the exam.

“I want to have growth measures put in place instead,” she told StateImpact last month at a WFYI-sponsored community conversation, saying a reworked exam could help teachers remediate students who need help.

To make that change, though, she’ll have to convince the State Board of Education — a body that some lawmakers believe overstepped its bounds in enacting the third grade reading policy in the first place.

Here’s what Ritz told StateImpact about the IREAD-3 during the March 6 event. If you want to follow along in the video above, skip ahead to around the 18:30 mark:

I’m going to be working here soon to try to not have the IREAD-3 in place, where we have high-stakes tests for little third graders. I want to have growth measures put in place instead. I’m starting to have that dialogue with the State Board… I’m moving ahead. It’s too important for the students in Indiana to not have correct measures in place so we can use them instructionally and take kids where they need to go…

I want to go from a pass-fail remediation to a growth model intervention. To me, when you’ve got assessments in place K-3, we’re going to be looking at students’ progress that whole time and putting in interventions as we go instead of having pass-fail and always remediating…

Can we have a different type of measure and schools accountable? The answer is absolutely yes. We want to look at not only achievement, but growth. With a pure growth measure test, where a second grade teacher knows the reading levels of the students in their classroom, they want to take them another year beyond. If you have a second grade classroom and you have fourth grade readers in your second grade classroom, they’d better be fifth grade readers by the time they’re done with second grade. That’s where it should be — there should be a year growth in a year’s time. Not only could we look at that but we also have the benchmark… 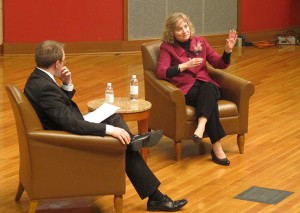 State superintendent Glenda Ritz addresses an audience at the Indianapolis Central Library during a public forum on March 6.

If you’re asking if I want the state of Indiana to get in the retention business, which is what it is now, the answer is no. I don’t think I have any business keeping a retention list at the state of Indiana and forcing those children to take a third grade test when, in actuality, the school corporation could move that child on to fourth grade. It should be a locally-based decision, as it has always was meant to be. Retention is not a proven, research-based way to improve student achievement.

(We can only embed the first twenty minutes of Ritz’s remarks in the video above. The full video is on WFYI’s website.)

As a counterpoint, here’s an excerpt of an interview the Indiana Chamber of Commerce’s Derek Redelman gave last May.

He told StateImpact there’s broad agreement that it’s critical students master foundational reading skills by third grade. Redelman those who argue against retention of students who don’t pass the IREAD-3 have a point if schools are simply repeating the grade without trying to help that student in a different way. But, he added, he didn’t feel that’s what the state’s reading policy was asking schools to do:

Retention alone is not an effective strategy. You need to do other things heading up to retention. Then retention needs to be a last resort. If you do retain, then you’ve got to do something different in the time you’re retaining, otherwise, absolutely…

We often times just decide, ‘Well, it didn’t work this time so let’s just do it again.’ And — if that’s our approach — then remediation of any kind, whether it’s during the school year or over the summer or requiring kids to repeat the grade, it’s likely to fail. But if you take that extra time or that intervention, whatever it is, and take a different approach, that’s what’s more likely to succeed. Yeah, those who say ‘Just repeating it,’ if that’s what we’re doing is just repeating it, then yeah, they’re probably right, there’s not going to be a lot of success there.

I think what DOE is putting together is a whole package. They have been promoting particular curriculum approaches that have evidence backing up their success. They have urged this 90 minute reading block as one of the issues, but not the only one. They have created several diagnostic testing opportunities so that teachers and schools can monitor the progress that their students are making. I think it’s a whole set of approaches.

And I do think the retention issue really is an absolute last restort. I don’t think anywhere in DOE’s plan have they said, ‘Hey, we’re going to test at the end of the third grade then by golly we’re gonna hold you back.’ They’re doing a whole bunch of stuff leading up to that and I think anyone who portrays this purely as a retention program either is not informed or is trying to distract from what’s really going on.