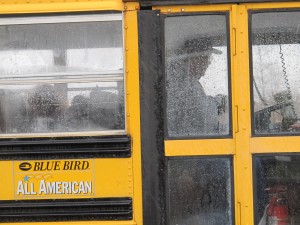 A school bus driver in Fortville.

This story from our partners at Indiana Public Media in Bloomington caught our attention. As the Monroe County Community School Corporation’s school year has started, the district has found itself in desperate need of bus drivers. Bari Finkel reports:

School administrators count on losing around five drivers each summer. Most leave because they have found better-paying full-time jobs.

But this summer MCCSC also saw an unusually high number of bus drivers retire. All told, the district has lost  39 drivers – or about 30 percent of its workforce — since May 2012.

Indiana State School Bus Association President Ron Chew says a shortage of that size can amount to a crisis.

“That means that school system’s in a world of hurt,” he says. ”They have to scramble to get people to run those routes on a daily basis.”

Hey, Bloomington readers! Can you tell us what’s going on here?

Could it have something to do with this Times of Northwest Indiana story from April?

All bus drivers must now hold an Indiana commercial driver’s license, the same type required for truck drivers, he said.

School routes probably will not be as hard hit as will extracurricular activities and field trips by the shortage of drivers, Gandolfi said. That includes sports away games and academic events that Lake Central students participate in, he said.

“The writing is on the wall,” Gandolfi said.