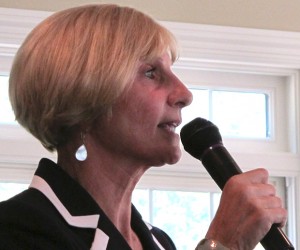 A disagreement over how to count one student could make a big difference for one school in Monroe County Community Schools, that district’s superintendent says.

Judy DeMuth says MCCSC administrators have filed an appeal with Indiana Department of Education officials over the preliminary A-F letter grade they gave a Bloomington school (she can’t say which one). She says there are clear errors in the data the state used to calculate the school’s grade.

“It’s been very difficult to figure out how to match the numbers that we have and the number and the names that the state’s using,” DeMuth tells StateImpact.

DeMuth’s frustrations come as questions surface about why the release of Indiana’s school letter grades — being calculated for the first time this year using a model that’s more closely tied to individual students’ academic “growth” — has been delayed by two months.

The delay caused one longtime state education policy-watcher to call the release of the grades a “fiasco” — but state officials say many criticisms of the delays are unfair.

“Any time a new process or policy is implemented, there’s always an adjustment period as all parties involved adapt to a new way of doing things,” IDOE spokesperson Alex Damron said. “There’s nothing wrong with this as long as everyone works together toward an outcome that benefits students.”

What MCCSC Says Is Wrong

DeMuth says in calculating the pass-fail rate at the Monroe County school in question, state officials miscounted a number of students who took a statewide test. In other words, they picked the wrong “denominator” in the equation of students who passed divided by the students who took the test. She told StateImpact in an interview:

In the documents that are in front of us, we had a discrepancy. In one place the state used— the number of students was 32. On another page the number was 29. If we use the 32 number, [that school’s letter] grade is one grade that is higher than if we use the 29. But in the state’s document, the number was reported two different ways. That was the discrepancy that I’m talking about. It’s a discrepancy of the numbers being used to calculate our grade. 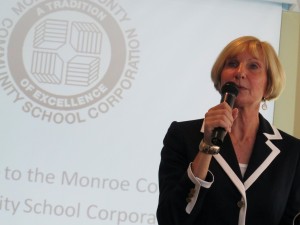 To compound her frustrations, DeMuth says district administrators had been working fruitfully with an Indiana Department of Education employee to sort out the data problems. DeMuth says the employee left the department to take another job. When the new state employee took over, DeMuth says they were back to square one in solving the problem.

(StateImpact didn’t ask whether the IDOE employee was Jon Gubera, who had been in charge of implementing the A-F grades. As Scott Elliott notes on his Indy Star blog, “Gubera left for a job at the College Board and actually delayed his departure to try to finish up work on the A to F grades.”)

DeMuth says she’s not alone in her frustrations. She says she was at a meeting with state superintendent Tony Bennett and “probably 35 or so” district superintendents. She says “all seemed to be very frustrated about data discrepancies” in their letter grades.

‘We Believe This Dialogue Is A Good Thing’

Indiana has been using the same pass/fail metrics to grade schools since 2005, so it’s no surprise school corporations have questions about this year’s new calculations. I would argue this is a positive development. Local school leaders are asking the right questions, paying closer attention to student data, and maintaining a critical focus on the skills our students need to succeed. The new A-F grading system provides a more accurate and comprehensive picture of school performance. It represents a step forward for our schools and students.

In the last few weeks, we’ve fielded several calls from administrators wanting to learn more about the new metrics and how their local data is being used. Again, we believe this dialogue is a good thing. School leaders have had the opportunity to better familiarize themselves with the process before the grades are publically released, and we’ve been able to work with them to ensure the data they’ve provided us is accurate and up to date.

And, as Damron previously told the Indy Star:

The decision to publicly release grades on October 31 was heavily influenced by feedback from the field. Much of the data used to calculate school grades is provided by schools themselves and many school leaders requested extra time to review their own data points. Understanding this first year of A-F grades using a number of different data points takes some adjustment on the part of school officials. Thus, the department has extended important appeal deadlines so we can help schools understand their data before the grades are released publicly.

And counter to the “fiasco” narrative, IU Center for Evaluation and Education Policy director Jonathan Plucker told StateImpact he thought the delays in the A-F grade release demonstrated “an appropriate level of caution” on the part of the state.