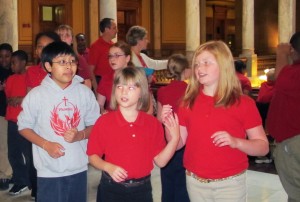 Private school students wait outside the Indiana Supreme Court as justices hear a challenge to the state's voucher law. The state's high court upheld the program in March.

Republican lawmakers pounding out differences between House and Senate versions of a proposal to expand the state’s school voucher system are close to a deal, reports the Indianapolis Star‘s Scott Elliott:

A vote could come today on a revised version of House Bill 1003 that would extend vouchers to income-qualified siblings of those already using vouchers, students in special education and those living within the boundaries of a school rated a D or F by the Indiana Department of Education.

None of those students would have to first attend public school for at least two semesters in order to receive tax-funded vouchers to pay private school tuition, as is now required.

Although the deal leaves out children from military families or who are in foster care — both were included in prior versions — the addition of schools rated D or F would make thousands of Hoosier children newly eligible. The changes would take effect next school year.

Indiana already has the fewest limits on vouchers, and its voucher program is among the fastest-growing in the U.S.

The bill’s author, Rep. Bob Behning, R-Indianapolis, estimates as many as 180,000 students would be eligible for vouchers under the new rules. But he says he’s not worried about a mass exodus from public schools after a 2011 study indicated Indiana’s private schools only had open seats for about 22,000 students.

Based on the state’s accountability system, an analysis of Indiana Department of Education records shows that it’s not unusual for students using vouchers to chose schools rated no higher than the ones they left.

About one in five students who received a voucher this year is using it at a school rated C, D or F on the state’s accountability standards.

About 21 percent of students who received vouchers left A- or B-rated school corporations to attend private schools.

Because of educational privacy laws, it’s hard to trace a clear path out of public schools and into private schools, making it hard to say how many students left an A or B school for a lower-performing private one.