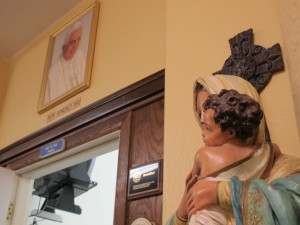 School choice advocates who had hoped for a big boost in the dollar amount of Indiana’s Choice Scholarship Program will have to settle for a $400 increase over the next two years.

As voucher legislation left the Senate Thursday, the bill’s author, Rep. Bob Behning, R-Indianapolis, proposed an amendment lifting the cap from $4,500 to $4,700 next year and $4,900 in 2015. It’s significantly less than the $6,500 originally proposed in a bill that’s undergone many changes as it moved through the statehouse.

At different points, the proposal has included provisions making siblings of participating students eligible for vouchers, increasing access for foster and military families and eliminating the public school requirement for incoming kindergarteners. But then the Senate Education Committee narrowed expansion to any student living in the attendance zone of a F school, a change Indiana Public Broadcasting‘s Brandon Smith reports Behning won’t fight:

Rep. Behning says he doesn’t plan to address the attendance requirement after the Senate altered it.

“I did not change any of the parameters they had in terms of that … they have already voted on what’s in the bill,” he says. “I’m not trying to ask them to revote on that issue.”

The Senate passed the voucher expansion bill by only a two-vote margin. The bill’s senate sponsor, Doug Eckerty, R-Yorktown, says he anticipates another close vote.

“We’ll have to take a look at it in its fiscal entirety, how everything all fits together, not just with this but with the budget as a whole, the governor’s tax cut proposal and things like that,” says Eckerty. “So it’s all going to have to go into the mix. Then we’re going to have to sort it all out.”

Behning says it’s likely the state legislature will be asked to reconsider the public school attendance requirement in the future, as voucher expansion is a priority for Gov. Mike Pence.