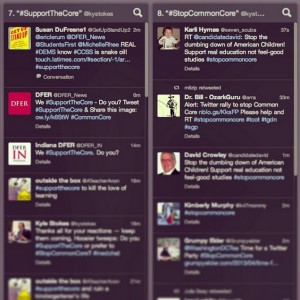 A screenshot of dueling Common Core hashtags on Twitter. Opponents of the standards held a "rally" on social media Tuesday, using the hashtag #StopCommonCore. Some who support the Common Core responded with Tweets labeled #SupportTheCore.

Debate over the future of the Common Core academic standards lit up Twitter on Tuesday as skeptical parents, teachers and advocates called on lawmakers to #StopCommonCore and its rollout in the nation’s public schools.

Supporters of the standards responded to the anti-Common Core “Twitter rally” with a hashtag of their own, #SupportTheCore.

The debate on social media mirrored persistent divisions among Indiana lawmakers, who will soon decide whether the state should continue to roll out the nationally-crafted standards in the state’s schools.

We rounded up some posts from a few Hoosiers who took to Twitter to weigh in on the debate:

@kystokes I’m in Indiana. How do I opt my kids out w/o ruining their lives w/teachers, principals? #stopcommoncore

…and a few more Hoosiers expressed their indifference:

Some Common Core opponents directly engaged proponents of the standards on the #SupportTheCore hashtag — Twitter users @thechalkface and @iteach4change even tried a little satire:

@mcalistp The 21st century is like, 87 more years. Likely things will change. #supportthecore

I #SupportTheCore because if a television can raise a kid, anyone can! #StopTheCommonCore

…but still others used #SupportTheCore for its intended purpose:

Let’s hope @inhousegop and @insenategop put students first and #SupportTheCore today! We owe our kids better than we had! #CCSS #edreform

A snapshot of Twitter analytics from the website Hashtracking around 1 pm ET showed the #StopCommonCore hashtag was “reaching” over 1.9 million Twitter users. #SupportTheCore reached closer to 260,000 users.

Opposition to the Common Core runs the ideological spectrum, pairing those who support conservative commentator Michelle Malkin — who see the standards as federal overreach — with others on the left. Susan Ohanian writes:

Risky as it might seem, I think Progressives should be able to join Conservatives in saying the words “local control” out loud — without fear of plunging over the cliff into a quicksand of hysterical right wing denunciation of everything from Social Security to the United Nations.

I remember that it was Republicans who prevented Bill Clinton getting the national test he wanted. And I applaud the way Conservatives have organized against the Common Core. I hope Progressives will join them.

Backlash against the Common Core has supporters of the standards worried. Mike Thomas of the pro-Common Core Foundation for Excellence in Education (the organization former Florida Gov. Jeb Bush chairs) blogs:

Our success in passing school reforms has had more to do with prevailing in legislative bodies than prevailing in the public arena.

This has led to a dangerous neglect of the need for marketing. We now are paying the price for that as our opponents vigorously fight back, defining reform as an attack on public schools that is degrading the quality of education. That this isn’t true doesn’t matter. Sound bites often trump data…

If we don’t define Common Core now, its opponents from the left and right will have carte blanche to do so after the shock begins in 2015. Like we’ve seen with reform, being right isn’t enough…

“What good,” Thomas added, “did that do Tony Bennett?”