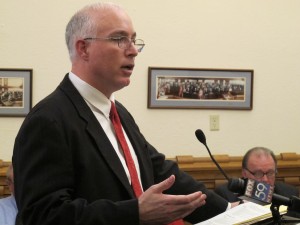 One of the biggest stories we’re watching next week also made big news this week: Indiana Senate members will once again consider a bill that would expand the state’s private school voucher program.

But the proposal lawmakers on the Senate Tax & Fiscal Policy Committee will consider in their meeting Tuesday morning looks significantly different than the proposal House lawmakers approved in February.

As we wrote Wednesday, the Senate’s Education Committee cut a provision from the bill that would make all entering kindergarteners able to receive vouchers, opting instead to make every student living in the attendance zone of an F school eligible.

But the public statements of the House Education Committee chair and Gov. Mike Pence this week suggest the debate over the measure might not be over just yet.

“A lot of the language that he deleted was the governor’s language,” Rep. Bob Behning, R-Indianapolis, said Wednesday. “We’ll have to see where the governor is and how passionate he is and whether he can convince people that his will should prevail.”