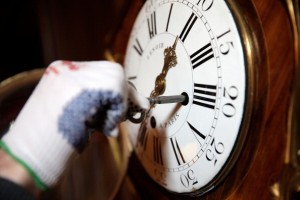 A clock is wound to the correct time.

Debate over Indiana’s time zone was once thought to be a “third rail” of state politics until Gov. Mitch Daniels put the Hoosier State on daylight saving time in 2006.

At the board’s next meeting April 8, it’ll consider a resolution to join the Central Time Coalition, a statewide volunteer-run organization that wants to see all Indiana counties on Central Time.

“I get so many complaints during the winter about how dark it is when (school buses) are picking up the kids,” said Bill Sniadecki, the board member who initiated the resolution.

A switch to Central Time, which would push clocks back an hour, Sniadecki said, would make it safer to transport kids to school on dark mornings.

Information on the Central Time Coalition’s website says more than 30 school boards “have signed petitions in support of reuniting the majority of Indiana in its original Central Time Zone.”

The group’s president told The Tribune it’s now more than 40 school districts who have called for the move back to Central time in the winter and Central Daylight time for the rest of the year.