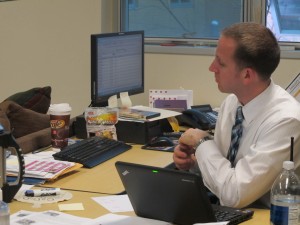 Thursday morning the doors of Ben Davis Ninth Grade Center were locked when I arrived for an interview with Assistant Principal Steve Samuel. It was for a story I’ve been chasing for a few weeks about teacher evaluations.

When I visit a school for the first time, I usually  guess which doors remain open to visitors during the day. But I had been to Ben Davis before and knew I was in the right spot. And I wasn’t the only one waiting — a parent also standing outside told me the school was on lockdown.

Samuel paused. “We’re on external lockdown.” He said if I could hang out for a moment, he had the authority to come down and let me in.

A few minutes later, Samuel came through the office and unlocked the exterior door. He let me enter, then chatted for a minute with the mom trying to pick up her sick kid. She, too, was permitted inside the school.

He also took a call from Mary Lang, Wayne Township’s communications officer. Samuel told Lang she could use her key to enter the school. When she came upstairs to Samuel’s office a few minutes later, she said she’d been stopped by an administrative assistant at the school’s main office who didn’t recognize her and wanted to make sure she had permission to enter the building.

The entire time, Samuel was in contact with other administrators via radio. Police officers assigned to the school questioned anyone trying to access the school who matched the suspect description, including a parent dropping off a late student. Lockdown ended around 10:30 a.m.

My interview with Samuel had been on the calendar since last week, so I had no way of knowing the school would be on lockdown for most of my visit. But as someone who visits schools nearly every week, it’s hard not to think about security each time I’m asked to sign in or show my ID.

I know that in the weeks since the Sandy Hook Elementary shooting, I’ve gotten better about making sure my press badge is with me at all times. Most journalists who carry equipment will tell you that a camera or microphone gives you good access in most locations. That’s great news for the absentminded among us — I cleaned out my car recently and found two press badges I thought I’d lost.

But I haven’t forgotten to wear my credentials once in the weeks since Dec. 14. Last week, a kindergarten student unaccustomed to seeing visitors narrowed his eyes suspiciously and asked his teacher if I was supposed to be there. His teacher told him that the press pass pinned to my sweater meant I “was one of the good guys.”

I’m not a parent, so I can’t relate to the anxiety I’m sure many of our readers felt sending their kids to school the Monday after the Connecticut school shooting. Of course, no security protocol is infallible. But I’m glad I happened to be in Wayne Township this morning.

Everyone did his or her job.

(Especially the office secretary, who absolutely made the right call questioning Lang when she didn’t recognize her as a school district employee.)

Lang says like many districts, Wayne Township is looking at ways to make its schools safer.

I’m sure what happened Thursday was inconvenient for the parents who needed to pick up sick kids or drop off late ones. But as Lang pointed out, just because someone looks like a student or a parent or a journalist doesn’t mean they always should have access to a school.