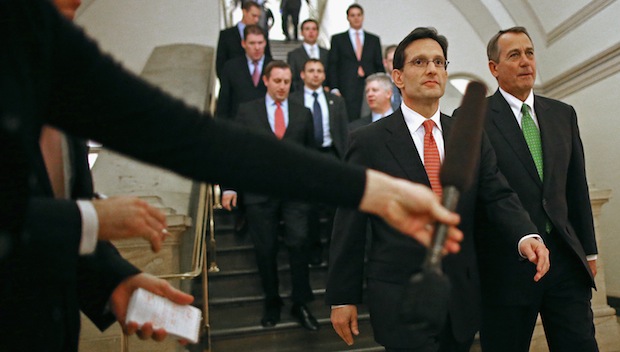 A reporter puts a microphone up for GOP House Speaker John Boehner, right, and House Majority Leader Eric Cantor, R-Virginia, as they walk together to a meeting of the House Republican Caucus. Boehner ultimately voted to pass legislation created to avert so-called "fiscal cliff" tax hikes. Cantor opposed the bill.

But without Congressional action beyond the deal approved last night — which suspends across-the-board, automatic spending cuts for two months — Indiana schools could still stand to lose tens of millions of dollars in federal education funding next school year.

While no Indiana school district would lose more than 3 percent of its overall revenues, we’ve outlined how the automatic cuts, known as “sequestration,” would hit special education, Title I and Head Start programs if they’re not switched off in two months.

As our go-to “cliff”-watchers at Politics K-12 report:

This isn’t the last spending battle that Congress is facing by a long shot, said Joel Packer, the executive director of the Committee for Education Funding, a lobbying group, and an all-around edu-budget smarty pants. Congress still has to pass a final budget for fiscal year 2013, which began Oct. 1; right now, the federal government is operating on an extension measure that expires at the end of March.

So where did these sequestration cuts come from to begin with? In a nutshell, they were the result of a deal that allowed Congress to raise the debt ceiling back in the summer of 2011. And now, yet again, the nation will likely need new legislation—or some kind of other deal—to raise the debt ceiling early next year, according U.S. Treasury Secretary Timothy Geithner.

“That could be another big fight,” Packer said. “There’s almost an endless series of fiscal cliffs we’re facing; … it’s just endless uncertainty for everybody.”

…and here’s more on that ‘other big fight’ from the AP:

Senators postponed tough decisions on government spending, giving themselves a reprieve from cuts that were scheduled to begin taking effect automatically Jan. 1. That just sets the stage for more hard-bargaining later, even if the House approves the Senate’s version.

And another standoff is likely to arrive as early as February when Congress will need to raise the $16.4 trillion federal borrowing limit so the government can keep paying its bills. House Republicans probably won’t agree to raise the debt limit without offsetting spending cuts that Democrats are sure to resist.

Our current cuts of $12 million will be minimal if we fly off the #FiscalCliff next week.Sequestration will be devastating.