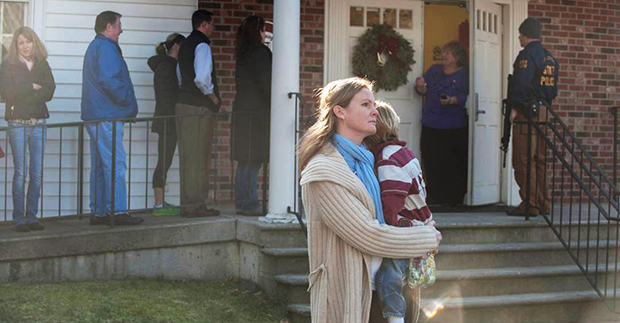 A woman holds a child as people line up to enter the Newtown Methodist Church near the the scene of an elementary school shooting on December 14, 2012 in Newtown, Connecticut. The shooter was also killed.

Though more than 600 miles away from any Indiana school, Sandy Hook Elementary School in Newtown, Conn., seems a little bit closer for many Hoosier parents and teachers.

Police say 27 people — including the shooter and 20 children — were shot to death at the Connecticut school Friday, the highest death toll in a shooting at an elementary or high school in the nation’s history.

“I don’t know how I’m going to focus the rest of the day,” South Bend teacher Brian Bennett tweeted upon hearing the news.

With NPR, the major television networks and most news sites running wall-to-wall coverage of the tragedy in Connecticut, it’s likely your kids will have questions.

So as they come home from school tonight, give them a hug — and keep handy these resources for talking to them about tragedy. From The National Association of School Psychologists (NASP):

Give children the information they need to know in a way that makes sense to them. At times, a few sentences are enough… If a child talks about a news event (like a local robbery or kidnapping) and is worried, recognize her feeling and comfort her. You might say ‘I can see you’re worried, but you are safe here. Remember how we always lock our doors.’ This acknowledges your child’s feelings, helps her feel secure, and encourages her to tell you more.

How children experience traumatic events and how they express their lingering distress depends, in large part, on the children’s age and level of development.

So the NCTSN offers a two-page tipsheet on how to handle discussions of tragedy differently with preschool-age children, elementary-age children and adolescents.

It might be reassuring to children that all Indiana schools must submit an emergency preparedness plan every year. Indiana Code calls for that plan to cover a wide range of possible events — from fires to natural disasters, weather events, bomb threats and, yes, “manmade occurrences  such as… [a] weapon.”

That’s in line with the advice of the NASP, which advises adults to “explain that the government emergency workers, police, firefighters, doctors, and the military are helping people who are hurt and are working to ensure that no further tragedies occur.”