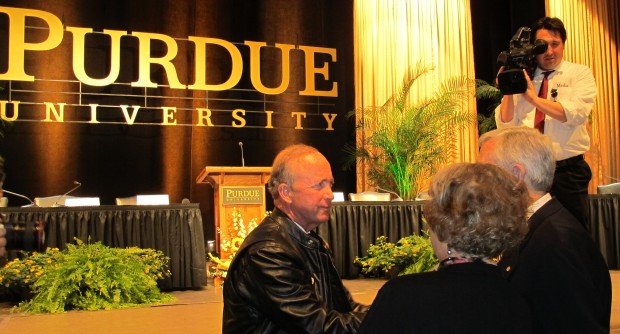 Gov. Mitch Daniels accepts congratulations after the Board of Trustees announced he would be the next president of Purdue University.

Outgoing Gov. Mitch Daniels will make at least $420,000 annually in his new job as president of Purdue University, the school’s board of trustees agreed Saturday.

While Daniels’ base salary amount ranks among the lowest in the Big Ten, he’ll have the chance to make up to $546,000 total if he can earn “performance bonuses based on critical goals such as increased graduation rates and affordability,” Purdue officials said in a statement:

If all goals are met — and [Purdue Board of Trustees chairman Keith] Krach said a perfect score would be difficult — Daniels’ pay could reach $546,000. Compensation for the previous Purdue president [France Córdova], including deferred compensation, was $555,000. Daniels’ potential salary would rank 10th in the Big Ten, according to April 2012 data.

The Lafayette Journal & Courier has a copy of Daniels’ full contract.

Even if he doesn’t earn a single performance bonus, Purdue will pay Daniels nearly quadruple the amount he took home in a year as governor. But his base salary amount will still be lower than that of the leaders of both Indiana and Ball State universities.

Daniels’ base pay will top that of Ivy Tech Community College system president Tom Snyder, who brings in $300,000 per year under his current contract, according to the Journal & Courier.

WISC-TV rounded up the salaries of other Big Ten university presidents. Per the Purdue statement, Daniels’ pay would rank 10th in the conference.