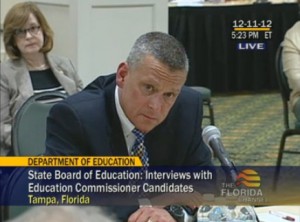 Outgoing State Superintendent Tony Bennett takes questions from the Florida State Board of Education during an interview on Dec. 11, 2012. Bennett is one of three finalists for Florida's top schools job.

Bennett, one of three finalists for the position, has long credited former Florida Gov. Jeb Bush for pioneering many of the policies he’s pushed in Indiana.

“We’ve spent four years doing this in Indiana to a measure of success — some would say most recently to a measure of failure — but I believe Florida has the opportunity to again lead the nation, and I look forward to taking that challenge,” Bennett said during his interview.

The Florida State Board of Education is expected to select a new commissioner Wednesday.

Here are some highlights from Bennett’s interview, which was broadcast live on The Florida Channel.

When asked how to ensure reading literacy in the early grades:

One thing we got right in Indiana was universal accountability. Everybody plays by the same rules. All schools are graded the same way. They get their grades. The expectations are the same. I think we have to be very clear what we expect the outcomes to be.

When asked how he’d work with Florida educators and teachers unions:

Let me say this, I don’t think there’s any question that many people would say the Indiana teacher unions are part of the reason I wasn’t elected because of much of the same blowback. So let’s be very real about that and let’s be very transparent about that. One could argue my record with them is probably not very good either. But again I want to go back to the idea of winning the hearts and minds of teachers. …

One of the things we did that was very successful — and I will admit it’s something I wish we would have done more of in 2012 that we did a tremendous amount of in 2011 — is we sent every teacher in the state emails twice a week. We didn’t go through their state union. We went directly to teachers and we talked directly to teachers. Some of those early emails weren’t welcome. We got some pretty raw responses, frankly. But by the end, we were getting responses that said, ‘While we may disagree with this, we appreciate your candor, we appreciate your honesty.’

When asked how he’d handle working in an appointed position with elected officials:

I’m not sure I can answer your question about my ego and working with elected officers … I guess my response would be call our governor and ask him because I think he would tell you the vision for Indiana education was Mitch Daniels and my job was to execute. I took that responsibility to heart. He allowed me the flexibility to do that, and I appreciate that. But I always knew who the CEO of the state was, and I always knew our board would ultimately make the policy decisions, not just the elected state superintendent.