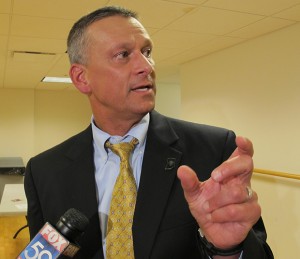 Florida’s Board of Education voted unanimously Wednesday morning to give Bennett the Sunshine State’s top appointed education job. Bennett will oversee 2,500 employees in the state’s Department of Education.

Bennett threw his name into consideration after losing his re-election bid to Democrat Glenda Ritz. The board interviewed three finalists this week.

“I think we all work for one group of people that we sometimes forget — that’s about 2.7 million children,” Bennett said when asked Tuesday how he’d work with the state board and Florida Gov. Rick Scott. “We have to keep that as our No. 1 focus. Every decision, every discussion we have should be what should give 2.7 million children the greatest opportunity to survive and flourish.”

In shaping education policy in Indiana, Bennett borrowed heavily from former Florida Gov. Jeb Bush. But when rumors swirled a year ago that he planned to leave for the Sunshine State, Bennett reiterated his commitment to Hoosiers. That was before he fell short in the November election.

As a guy who is a Hoosier through and through, who spent all but one year of his professional life in Indiana, I had to ask myself how important it was to balance that issue between loving the role of state school chief and driving education policy for children of a state versus living in Indiana. And I don’t believe there are any other states in the country better than Florida to do what I love to do. I’m excited about it, but will it will be hard? Of course it’ll be hard. But on January 11, I have to make a pretty quick emotional and intellectual pivot. And that emotional and intellectual pivot is I have to put Indiana in my rear-view mirror if I’m selected.

Bennett echoed that sentiment Tuesday when he interviewed in Florida.

“I get every morning in Indiana, and for the last four years, I’ve loved a job unlike I’ve loved any other, and I thought I loved coaching more than anything,” he said.

Bennett’s experience in Indiana helped land him the job. Like Indiana, Florida is one of 46 states on track to adopt the new Common Core academic standards. Board member John Padget noted Bennett’s experience working with teachers and administrators is an asset Florida will need to implement new policies.

“We need someone that has the understanding that no matter how good the policy may be, if it’s not implemented faithfully at the classroom level, then it’s just words,” Padget said Wednesday. “As a teacher, he brings that very special perspective.”