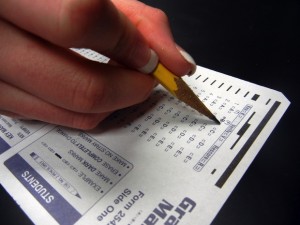 State education departments nationwide spend “upwards of $1.7 billion” every year on contracts for statewide tests, according to an estimate The Brookings Institution published Thursday.

It’s a big number, but not a shocker — Pew reported a similar figure in 2008 — amounting to “only one-quarter of one percent of annual K-12 education spending,” writes report author Matthew Chingos.

The estimate comes from the contracts 45 states drew up with outside groups to develop their tests in the past few years, including Indiana’s 2008 deal with McGraw Hill.

That contract, in 2012 dollars, was worth more than $30.3 million. Divide that figure by the Hoosier State’s 562,000 students in Grades 3-9, and Indiana spends $54 per student on statewide tests — a number higher than all but 6 other states and Washington, D.C.

Indiana currently spends $46.2 million on testing — “roughly seven-tenths of a percent of our total state education budget,” a post on the state’s Department of Education website notes.

“I’m not going to spend $46 million on testing,” Ritz said prior to her election. “We’re going to have a simple assessment system whereby we can maximize the number of dollars that are actually going to be used for instructional programs.”

But the amount spent on testing could have just as much to do with economics as with state-level educational priorities.

“Larger states tend to spend substantially less, per student, than smaller states,” Chingos writes, “which is not surprising given that larger states save on fixed costs like test development by spreading them over more students and may have more bargaining power.”

So Chingos argues states should band together — much as many are currently doing to draw up new assessments based on the new Common Core academic standards — to save money. He continues:

States should seek efficiencies in order to absorb budgets cuts without compromising test quality or to free up resources that could be reinvested in upgrades to assessment systems. A clear strategy for cost savings suggested by our data is for states to collaborate on assessments so as to share the fixed costs of test and item development over larger numbers of students. Our cost model predicts substantial savings from collaborating on assessments. For example, a state with 100,000 students that joins a consortium of states containing one million students saves an estimated 37 percent, or $1.4 million per year; a state of 500,000 students saves 25 percent, or $3.9 million, by joining the same consortium.

Indiana’s spending on statewide testing (again, $54 per student) is comparable to states such as Washington and Massachusetts that spend $60 and $64 per pupil, respectively, on state tests. Student enrollment numbers in those states are similar to Indiana’s figures.

But Arizona and Tennessee — also similar to Indiana in enrollment — spend half the amount Indiana does. Tennessee spends $27 per student on testing. Arizona spends $22 per student.