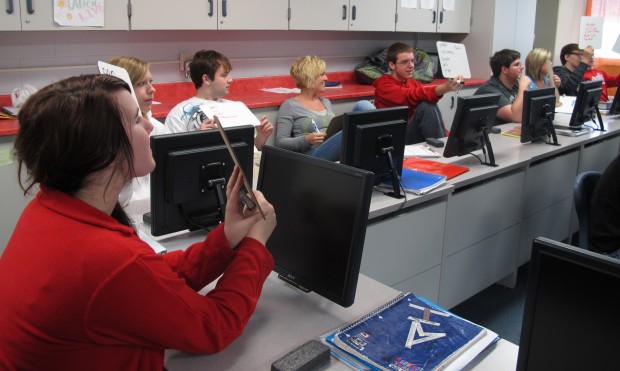 Running a school corporation is expensive. That’s why Governor Mitch Daniels has pushed consolidation as a way for small, rural schools to save money.

But it’s not a popular move. Voters in Northern Parke County recently decided to reorganize into one district in a last ditch effort to avoid consolidation of the two school buildings. The plan is to split administrative costs while maintaining separate identities.

“The two schools combined now are smaller than what one of them was back in the early ’70s,” says Turkey Run Superintendent Tom Rohr.

Residents Want Schools To Stay At Center Of Community

Steve Stewart is like a lot of local residents. He grew up in Parke County, graduated from Turkey Run High School in 1969 and today teaches math at his alma mater. He doesn’t like the idea of reorganization. But he says the state has tied the hands of small schools that can’t otherwise stay solvent because of declining enrollment. 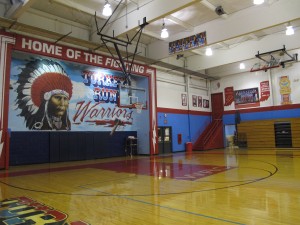 Turkey Run Principal Dwight Ashley says the gym of the junior-senior high school is a good example of the district's heritage.

“People are upset,” says Stewart. “Even the people that voted for it, we’re still upset. Most of them, if you asked them whether or not they agreed with it, they did not agree with it. Most people who voted to make that change did so because they thought there was no other alternative.”

About 58 percent of voters in Turkey Run and 78 percent in Rockville said yes to reorganization. It’s better than the alternative — that declining enrollment might someday force one or both of the schools to close — but it’s still hard for people like Stewart to accept.

“If anything happens in our community, it pretty much has to happen here,” he says.

That’s because Turkey Run isn’t actually a town. It’s at the center of six townships, across the street from Turkey Run State Park. Dwight Ashley is principal of the high school. He says local history is incredibly important to the community.

“You have this massive, very politically incorrect mural here,” he says, stepping into the gym.”I don’t know if you noticed the ‘warriors’ written in blood there with the hatchet, but that’s very much a part of the heritage.”

Savings From Reorganizing Are Smaller Than Consolidating

But starting on Jan. 1, Turkey Run won’t be its own school district anymore. It becomes part of the North Central Parke Community School Corporation with neighboring Rockville.

“At the central office level, the big change is we go from two school boards, two superintendents, two business offices, down to one,” says Rohr.

But that’s not how school districts that consolidate save money, says Purdue economist Larry Deboer.

But that’s exactly what school officials want to avoid. There’s concern that eventually the two schools will have to merge. But Rohr says neither high school building is big enough for kids from both districts. So at the moment the plan is just to share staff.

“What we hope to do is over time better utilize the staff that we have, make courses available for both school districts where maybe the teachers are traveling back and forth so that the students are getting all the courses they need,” he says.

Here’s how it could work: Rohr says both districts have someone teaching Family and Consumer Sciences full time. There aren’t really enough students to justify two positions, but it’s hard to hire a teacher for just two or three classes a day. Now both buildings can share one teacher.

Rohr is already acting as superintendent for both districts. He’s close to retirement, but he says he’ll stay through the reorganization to make sure the process runs smoothly.

“Even I made the comment, ‘I really wish we didn’t have to do this,'” says Rohr. “I really wish we were able to continue with strong, viable school corporations like we have for the last 30 years.”

Enrollment Could Continue To Decline At Both Schools

Other districts might have tried to pass a referendum. That’s what Oregon-Davis did in May and Hamilton did earlier this month. But Parke County is in one of the most economically depressed parts of the state.

“I’m talking about special education, counseling, all the different things we do with our students outside of the classroom, those resources are getting stretched thin.”
—Jeff Eslinger, Rockville Elementary Principal

The nearby state park means less land for homesteads, and the area has seen an influx of Amish farmers who don’t send their kids to the local school system.

“There’s just no infrastructure for business or industry,” says Rohr.

Eight miles down U.S. 41 at Rockville Elementary, Principal Jeff Eslinger says when he started in the district in 2006, about a quarter of students were on free or reduced lunch. This year at the elementary school it’s 70 percent.

“Obviously again with our demographics our student enrollment is gonna continue to roll, or decline, rather,” says Eslinger. “That’s a long-term concern. How do we address that? Boy, I don’t know. Hopefully we don’t get down to a situation where both schools as they have in the past are asked to do more with less.”