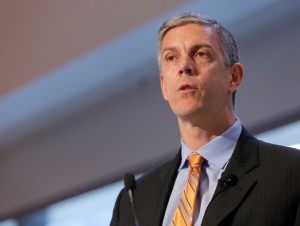 The Metropolitan School District of Warren Township has made it past the first cut in a nationwide competition for a share in $400 million of federal prize money, U.S. Department of Education officials announced Monday.

Of 24 Indiana school districts who initially applied for a grant in the Race To The Top competition, MSD Warren Township is the only one still in the running.

Race To The Top, as we’ve written, is an Obama administration initiative to reward districts that “demonstrate how they can personalize education for all students in their schools.”

More than 300 districts applied at first. Now, federal officials will review Warren Township’s application with the 61 other finalists.

Race To The Top

They’ll select between 15 and 25 of those finalists as winners of a four-year grant — from $5 million to $40 million, depending on the size of the applying district.

As we wrote in September, Race To The Top district winners would have to implement teacher evaluation systems, demonstrate how they’d manage student data and hold students to “college- and career- ready graduation requirements” (Read: the Common Core State Standards). Most Indiana districts are set when it comes to this.

But some anticipate a big takeaway to be that the winning districts will outline plans to “blend” digital curriculum with personal instruction.

“This Race to the Top competition does have the potential to reset American schools’ relationship with technology by encouraging a transformation from a one-size-fits all schooling model to one that can customize affordably for each student’s unique learning needs,” wrote Michael Horn.

As RiShawn Biddle blogged at Dropout Nation in May, he wanted the Obama administration to go further with its district-level competition:

Districts are neither allowed to become enterprise zones of sorts that can allow them to ditch collective bargaining arrangements, nor required to expand school choice (either through abandoning Zip Code education policies such as zoned schooling or by authorizing charters or voucherizing funds) or embrace Parent Trigger provisions that would allow families to take control of schools. But it does allow traditional districts, charter school operators, and American Indian and Alaska Native tribes to possibly gain federal money may finally push school operators on the ground — especially districts — to embrace systemic reform the way earlier rounds of the competitive grant program have made it easier for states such as California and New York to expand charter schools, require the use of student test data in teacher evaluations, and enact measures such as Parent Trigger laws.

But the competition has its doubters. That’s because, at least in part, some feel the competition focuses too much on evaluating teachers and highlighting data — policies that are controversial on their own.

“The mandates that come with [Race To The Top] will cost districts more than whatever money it brings to the district,” blogs education historian Diane Ravitch.

It’s worth noting — as we have before — that the original Race To The Top competition (started back in 2010; Indiana declined to apply) has hit snags in a few states who’ve run into trouble in the implementation process.