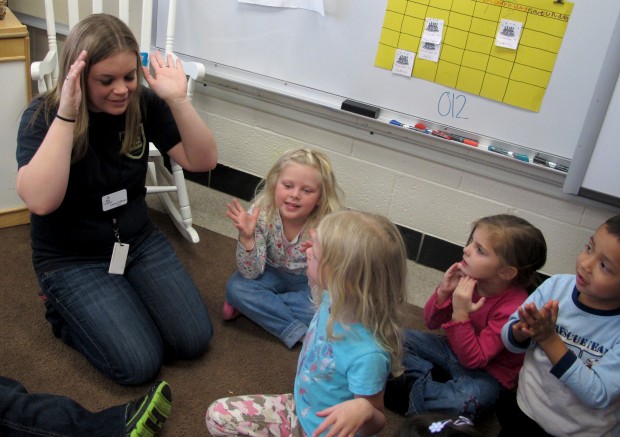 Students play an alligator game with their teacher at Busy Bees Academy, a public preschool in Columbus, Ind.

Because Indiana is one of 11 states that doesn’t provide state money for preschool, community groups, philanthropic organizations and even local businesses have stepped in to fill the void.

“My one overriding principle is that I don’t want to replace what is happening in communities around the state of Indiana — faith-based organizations, private philanthropy organizations, simply private efforts supported by local businesses to provide pre-K,” Pence told StateImpact.

Pence has said how to fund pre-K is a question for the legislature. But early education advocates say Indiana needs public funding for preschool.

Three years ago, a group of community and business leaders in Columbus decided it would be in the economic interest of the city to invest in early education.

“Fifty percent of the children in our community are eligible for free or reduced price lunch assistance. Parents are doing all they can to help their children, but they don’t have money available to set aside to fund pre-K,” says John Burnett, president of the Community Education Coalition. 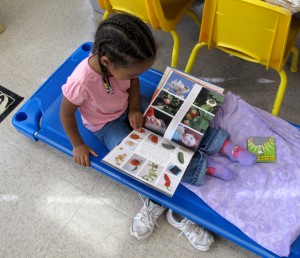 A student looks through a book about fruit and flowers at Busy Bees Academy, a public preschool in Columbus, Ind.

So Burnett’s group partnered with the Bartholomew Consolidated School District to open Busy Bees Academy, a public preschool, in 2009. Half of the 180 students pay full tuition, $80 per week. The other 90 students receive scholarships and pay just $5 a week. A social worker at the school helps low-income families prepare their students for kindergarten.

“We want to figure out as many of those issues in the year we have those students so when they go to kindergarten they’re ready and their families are ready.”
—Cathy King, Busy Bees Academy

“We try to make sure they know that school is a place where the parents are involved,” says Executive Director Cathy King. “We expect all of our parents to be involved.”

Class sizes are small at Busy Bees: One teacher and two aides work with about 16 students. But capacity is a real concern. So many families want to attend Busy Bees the school has to run a lottery — and fewer than half the students get accepted.

But plans to expand the program are on hold after voters rejected a tax levy increase to pay for pre-K. Burnett says his non-profit will continue to fund scholarships for needy students, but he’s worried that without public funding, some kids will slip through the cracks.

“A third of our children aren’t ready when they’re coming into kindergarten. It’s going to be tough between kindergarten and third grade to prepare them as well as we could if we were offering pre-K for 4-year-olds,” says Burnett.

About 13,000 Indiana students attend preschool programs through Head Start. Another 18,000 3- to 5-year-olds qualify for federal special education dollars. But because most kids go to private programs, it’s hard to say how many are enrolled in some sort of preschool.

Clare McCann researches early education funding for the New America Foundation. She says the lack of a uniform option can become a problem down the road for kindergarten teachers.

The result? Elementary teachers spend more time playing catch-up because they have to compress foundational learning into the early grades. That can put students behind when it’s time to assess reading skills and take standardized tests.

“We have test scores going from third grade through twelfth grade, and when students are starting with low scores in third grade, it’s probably because they didn’t have a strong enough foundation,” says McCann.

McCann says funding for early education is down across the country, even in states that fund pre-K programs. The 2012-13 schools year is the first for all-day kindergarten in Indiana, and state lawmakers say there’s just not money in the budget for another year of school.

IPS Investment In Preschool Program Is A Positive Step

When Indianapolis-area non-profit The Mind Trust released its proposal to overhaul the city’s urban school system last year, one suggestion was universal pre-K. Co-founder and CEO David Harris says one of the biggest problems with the state’s private preschool system is a significant variation in the quality of the programs.

“Without funding, efforts to really deal with early childhood education I think are destined to have very limited impact,” he says. “It’s not to say it’s not worthwhile, it’s beneficial for those kids, applaud the people who do it, but if we’re really going to tackle this issue, we need to put public money into it.” 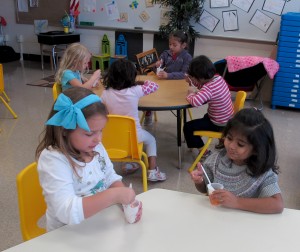 Students at Busy Bees Academy, a public preschool in Columbus, Ind., eat a jello snack they made as part of a class project.

Last month the IPS school board approved $6 million to send about 1,300 students to preschool. That falls short of the $14 million Harris estimates it would take to enroll every 4-year-old in the district for half a day.

But it’s a start. Ted Maple is education director for the United Way of Central Indiana, which helps parents identify quality preschool providers and runs pre-kindergarten camps in the summer. He doesn’t think Pence’s plan to build a mixed-delivery system to provide pre-K is implausible. Maple says other states have had success developing preschool programs out of existing programs. So he says he’s cautiously optimistic Indiana can build a better early education system in the next four years:

We had both gubernatorial candidates mention it as something they wanted to support — in different ways, obviously. We had the House Republicans come out with their 2013 agenda, and one of the things they talked about was vouchers for pre-K. We have big school districts like IPS that are investing in it. And we have a lot of business leaders, philanthropists and other organizations now really interested in how we might make this work.