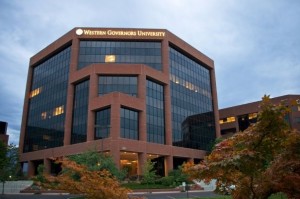 Add “competency-based education” to the list of strategies colleges can use to encourage on-time graduation.

Southern New Hampshire University is the latest to announce it will confer degrees based on something other than credit hour completion. The school plans to offer a $5,000 online degree awarded through a system of “direct assessment.”

Here’s how it works: Students have to prove they can complete a series of tasks — say, writing a business memo or creating a spreadsheet — to advance in their studies.

The idea’s spreading. Twenty other schools are working with WGU to design their own competency based programs, Jacobs reports. We noted last month that the U.S. Department of Labor will give community colleges in three states a total of $12 million to teach competency-based courses in key technology fields.

Even though schools like WGU are nationally and regionally accredited, many brick-and-mortar institutions have been reluctant to forgo the traditional college model in favor of competency-based education. Paul Fain over at Inside Higher Ed explains:

The academy’s nervousness about competency is understandable. Students learn at their own pace under the model — without guidance from a traditional faculty member — and try to prove what they know through assessments. If the tests lack rigor and a link to real competencies, this approach starts looking like cash for credits.

And competency-based education is controversial even when it’s backed by sound measurements of college-level learning. Most online courses share plenty with the traditional college classroom, most notably course material delivered by a professor or instructor. … But competency-based education, by definition, eliminates this part of the learning process, typically relying instead on tutors to help students grasp concepts as they work through self-paced course material, and only if they need help.

The academy isn’t the only one with reservations about competency-based education, writes Fain. There’s also tension in the federal government, which only has so much money and wants to make sure dollars flow into schools offering degrees of value. Schools like WGU say they offer more bang for the buck because they let students take as many competencies as they can complete in a set period of times.

The Lumina Foundation recently released a report from the Council for Adult and Experiential Learning tracking the expansion of competency-based education. The author notes some employers might like programs that eschew the traditional degree model.

“A competency framework sends a message to those outside the institution about what a college degree-holder should know and be able to do,” writes Rebecca Klein-Collins. “When the institution also assesses for those competencies, the message is one of transparent rather than abstract expectations.”

What do you think of doing away with credit hours? Is competency-based education something more schools should consider?