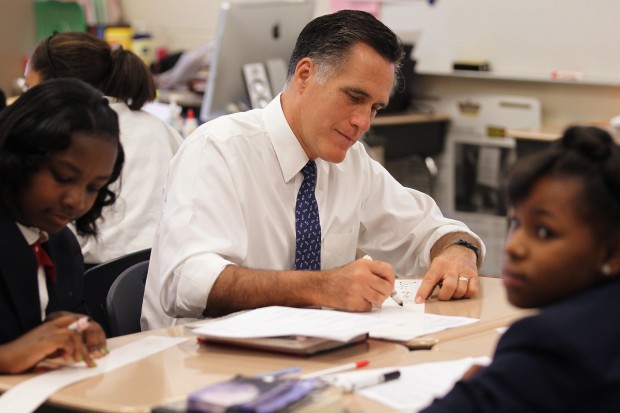 Voters who identify as independent are less likely to agree with the education initiatives of President Barack Obama and more likely to support private school choice, a policy Mitt Romney favors. That’s the latest from right-leaning online journal Education Next, whose blog post summarizing their latest poll results is worth a read, especially if the Chicago strike has piqued your interest in the role of teachers unions:

Whereas 25 percent of respondents to the EdNext-PEPG survey report that they are Republicans and 34 percent say that they are Democrats, fully 41 percent claim no affiliation with either major party. Of this group, 52 percent claim that they lean Democratic, while just 40 percent lean Republican. On key education issues, however, these independents express views that better align with Republicans.

The data Education Next collected tracks with a recent Gallup/Phi Delta Kappan poll that suggests independent voters are more likely to favor Romney over Obama. Over at The Education Reporter, Emily Richmond writes only about a third of respondents in that poll gave Obama an A or B on public schools.

Education Next writers William Howell, Martin West and Paul E. Peterson use data from the pro-teacher Phi Delta Kappan to put their finding in context. Both Republican and Democrats have courted Hispanic voters, and their summary pays close attention to the information gathered from that demographic:

On many topics—including school vouchers, charter schools, digital learning, student and school accountability, common core standards, and teacher recruitment and retention policies—the views of Hispanic adults do not differ noticeably from those of either whites or African Americans.

But in certain domains—estimates of school costs and school quality, support for teachers unions, teacher tenure, and teacher pensions—the views of Hispanics differ rather substantially. Their judgment of the American school is generous, perhaps because they compare public schools in the United States to much less effective institutions in Mexico, Cuba, and other parts of Latin America. … They are less supportive of unions and union demands than are African Americans.

About 63 percent of Hispanics polled told Education Next they support Obama’s initiatives. That’s less than the 92 percent of African American voters who say they agree with the direction the president is taking public education. Other interesting findings: