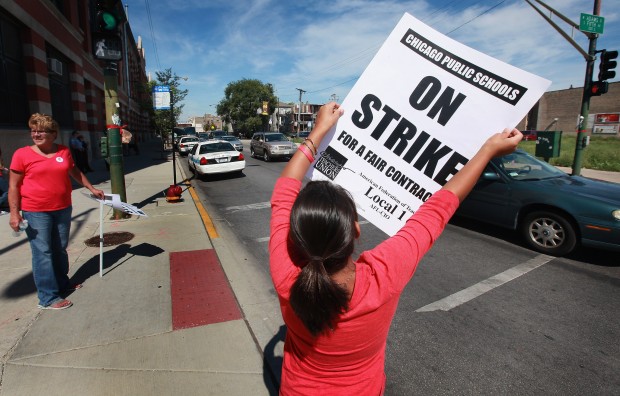 Sixth grade Chicago public school student Natalia Segal joins the picket line outside of Marshall High School on September 12, 2012 in Chicago, Illinois. More than 26,000 teachers and support staff walked off of their jobs on Monday after the Chicago Teachers Union failed to reach an agreement with the city on compensation, benefits and job security. With about 350,000 students, the Chicago school district is the third largest in the United States.

Chicago students could be back in class Friday after union leaders and school board officials indicated they had made progress during negotiations on Wednesday. Details of the talks suggest both sides will concede some points, reports The Chicago Tribune:

Under the proposal, teacher raises would be structured differently, as requested by the union; evaluations of tenured teachers during the first year could not result in dismissal; later evaluations could be appealed; and health insurance rates would hold steady if the union agreed to take part in a wellness program.

The new proposal also removes the district’s ability to rescind raises because of an economic crisis. The board stripped teachers of a 4 percent raise last year, sparking union distrust of the mayor.

Compromise could make it difficult to identify a clear victor after a week of back-and-forth over not just pay, but broad education policy issues with national context, like teacher evaluations and standardized tests. But over at Choice Words, blogger Adam Emerson says he already knows who will win: Chicago charter schools.

Of course, Emerson is writing for The Fordham Institute, which advocates in favor of charters, vouchers and school choice in general. Yet it’s hard to ignore that while 350,000 kids are out of school this week in Chicago, students attending city charter schools remain in class. Remember, charter schools are public schools, writes Emerson:

When Andrew Broy addressed reporters in advance of the Chicago teachers’ strike to say the work stoppage would have no impact on the city’s charter schools, he was doing more than just assuring current charter families that schools would remain open (12 percent of the city’s public school population of 400,000 is enrolled at charters). The president of the Illinois Network of Charter Schools was also engaged in public relations, knowing the strike would force tens of thousands of parents to alter work schedules or scramble for day care.

This week’s strike in Chicago is the first in 25 years. And Emerson is correct in noting that charter schools weren’t an option for frustrated parents in the late 1980s.

Chiming in over at Bloomberg View, education writer Tobin Harshaw points out that families who want to jump ship after the strike have lots of options — Chicago plans to open 60 more charter schools in the next five years. That’s in addition to the 100 that already exist in the city.

Harshaw writes it’s unlikely parents will sympathize with the striking teachers, who make an average salary of $76,000. But his summary of the issues is much more nuanced. The Chicago Teachers Union opposes using student data like standardized test results in evaluations that determine pay raises and firing. Yet merit pay is common in non-unionized charter schools.

The Chicago Tribune points out that the pay raises currently on the table mean something will have to give:

The issues of recall and how to evaluate teachers have been cited as crucial in recent days, while there has been little if any debate over a proposed salary boost that would average 16 percent over four years.

To pay for those raises, which could cost the cash-starved district $320 million over four years, other expenses would have to be cut. The money-saving tactics could include closing schools and shifting public school students to charters that mostly hire lower-paid, nonunion workers and get additional funding from philanthropic sources.