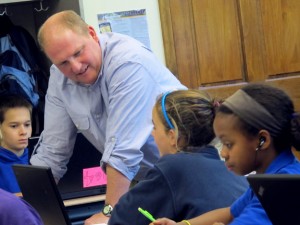 American teachers work more than 300 hours per year longer than educators in most other developed countries — yet according to a report released Tuesday, they only earn two-thirds the average pay other college graduates receive.

But Cindi Pastore doesn’t need an Organization for Economic Cooperation and Development report to know that.

“I doubt there’s two people and they’d have to be the dumbest people on earth that got into education because they wanted to make a boatload of cash. This is not where you’re going to find it,” says Pastore, who was a special education teacher in northwest Indiana when she spoke to StateImpact earlier this year.

Still, as Catherine Rampell writes for Economix, the OECD report highlights several incongruities in American education. Example: We spend more money per student than any other developed nation, but…

Despite the considerable amount of money channeled into education here, teaching jobs in the United States are not as well paid as they are abroad, at least when you consider the other opportunities available to teachers in each country.

In most rich countries, teachers earn less, on average, than other workers who have college degrees. But the gap is much wider in the United States than in most of the rest of the developed world.

A teacher in the average Indiana school corporation made roughly $49,000 in 2011, according to Indiana Department of Education data. That’s slightly below the national average salary.

Of course, in some districts, Indiana teachers make more money. The average teacher in Gary Community Schools makes $58,500 per year; in West Lafayette, $57,200. (Incidentally, statewide test scores in West Lafayette are among Indiana’s best. Gary’s scores rank among the worst. That said, there doesn’t appear to be any broad correlation across districts between salaries and test scores.)

The Chicago teachers’ strike has largely been framed as a debate over the implementation of new, controversial policies, such as teacher evaluations. But wages have played some role in the dispute between the Chicago Teachers Union (CTU) and the city’s public school district.

“Recognizing the Board’s fiscal woes, we are not far apart on compensation,” CTU president Karen Lewis said in a statement Sunday. “However, we are apart on benefits.”

The average Chicago teacher makes more than $71,000 per year, according to state data. Even after adjusted for cost-of-living, that’s higher than the $54,000 average annual salary of an Indianapolis Public Schools teacher.

A statewide teacher evaluation mandate took effect in Indiana this year, linking a teachers’ evaluation rating — and student test scores — to their pay.