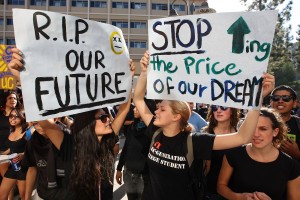 University of California Los Angeles (UCLA) students and supporters protest as the UC Board of Regents meets to vote on a 32 percent tuition hike.

We’ve written about how the classes you didn’t take affect the value of your degree — but what about the courses your classmates took? Jon Marcus at The Hechinger Report writes students paying full tuition almost invariably end up subsidizing the education of their peers:

As a new academic year begins, growing scrutiny of record tuition and fees is drawing new attention to the longstanding cycle of subsidies like these on which American colleges and universities depend—but which they would rather not discuss.

Now activists and legislators are … pressing for different prices for different subjects based on the actual cost of instruction, and, in some states, even proposing an end to a perk under which taxpayers subsidize tuition for faculty children.

Marcus likens the practice to airlines charging radically different fares for seats on the same flight. Most students know their university offers big tuition breaks to some but not others. Yet the individual nature of financial aid means few know just how much their peers are paying.

Fifteen states (Indiana isn’t one of them) have explicit policies that dictate how colleges and universities can use tuition dollars from one student to pay for the education of others. But practically, any school that charges more for out-of-state tuition than in-state is setting aside money to pay the college costs of other students.

It’s also common for younger students — freshman and sophomores for whom the bulk of instruction happens in large, lecture classes — to pay the same as older students who require more time and attention from professors.

And some degrees just cost more to offer than others, though increasingly schools are making up the difference in program-specific fees. For example, the University of Kentucky charges nursing students a flat $460 fee each semester. The University of Main tacks on a $75 charge for each engineering course.

According to The Hechinger Report, middle income families who make too much to qualify for much aid but can’t afford the cost of college upfront are most likely to feel the squeeze.

So a handful of states are moving to end the practice of setting aside cash from some students to pay for the degrees of others. Marcus writes that Iowa wants to end the practice within five years. That will mean relying heavily on fundraising to generate tuition assistance for needy students.