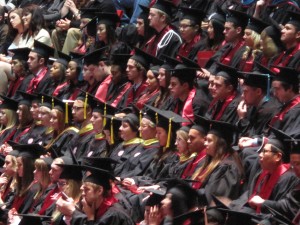 Quick show of hands: Did you take a foreign language in college? How about a history class? Any math at all?

As Andrea Neal opines at Indiana Economic Digest, there may not be that many hands in the air.

College costs and student debt levels are (Duh!) rising — so weighed against these trends, Neal wonders why statistics show only one in five colleges require their students to take a U.S. history course and 85 percent of colleges don’t require “intermediate-level” foreign language instruction.

She concludes it must be because institutions — including some in Indiana — are wavering in their efforts to provide a broad-based, liberal arts education.

Forgive the generalization, but many have earned diplomas without learning much in core subjects that require critical thinking essential to a successful career. Says the American Council of Trustees and Alumni (ACTA), “At a time when the demands of the modern workforce and global marketplace make a broad general education more important than ever, far too many of our institutions are failing to deliver.”

The organization gave schools a letter grade based on whether students had to fulfill a “core curriculum” in the disciplines of composition, literature, foreign language, U.S. government or history, economics, mathematics and natural or physical science.

Only 19 colleges, less than two percent, received an “A”. 37 percent got “B”s. A majority of colleges earned “C”s or lower.

So why does this matter? Some employers care about what classes you took in college, but some don’t, right?

Maybe. But at least one higher education research organization says what you learned in college has meaning to your employer, even if all they look at is your diploma.

Dewayne Matthews with the Indianapolis-based Lumina Foundation told StateImpact last month that college graduates are more likely to get jobs because employers not just because they have a physical diploma, but because employers believe the degree represents critical thinking skills that a prospective employee might bring to the table.

“The credential matters, but the credential matters because it represents actual learning,” says Matthews, Lumina’s VP of Policy. “If the learning isn’t there, then it’s an empty degree, and employers will quickly get the story— they’ll look somewhere else to get the people that they need, and the degree will no longer have the benefits.”

Of course, criticisms about the value of liberal arts degrees have been the subject of endless debate. What’s your experience been, in college or in the workforce? Do you think your employer cares about the liberal arts classes you didn’t take?