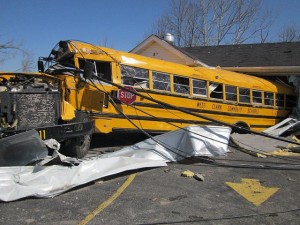 The tornadoes that struck Henryville, Ind., in March threw an empty school bus into a building. The driver made the decision to evacuate the bus and return the students to school. No one was injured.

The West Clark Community School Board has met 34 times since tornadoes devastated the Henryville School Complex in March, writes Chuck Hibbert for the School Security blog:

“We would have had children killed if we followed protocol.”
—John Reed, assistant superintendent

The time it took for the tornado to destroy not only the school in Henryville, but the town itself was 23 seconds. It points out the importance of knowing your plan or guideline so that decisions, once made, can be implemented quickly. You must be prepared by having a plan in place and following it based upon your  training, experience, and ability to adapt to unfolding circumstances.

Bus drivers also sent students into the homes of classmates to take cover rather than wait until they could be released to a parent or guardian. One driver, Angel Perry, returned to the school when she saw the tornado approaching. The 11 students on her bus made it into the building before the tornado blew the bus into a neighboring business.

“We would have had children killed if we followed protocol,” said Reed.

The 70 or so people who remained at the school were able to huddle in a basement, but if the principals had not dismissed school early, students would have been sitting in the hallway when the walls collapsed, Reed says.

A former transportation coordinator who now runs a safety consulting firm, Hibbert was a keynote speaker at the School Transportation Association of Indiana conference last month in French Lick. Some of his tips for other school districts:

“Safe zones. We’re going to rethink our strategies on what areas we can take kids to that may be more sound.”
—John Reed, assistant superintendent

Students at Henryville Elementary finished out the school year at Graceland Baptist Church. The district plans to reopen the school in August.