“We’ve got an inmate population that has infinite needs when it comes to education. The state has finite resources.”
—John Nally, Indiana Department of Corrections

A program allowing Indiana prisoners to earn college degrees from behind bars produced its last class of graduates this past year.

Lawmakers barred offenders from receiving state scholarships in 2011, cutting off the primary source of funding for Indiana’s Correctional Education Program.

Once one of the largest initiatives of its kind in the nation, the educational program filled a critical need. Research has long shown offenders with post-secondary education are much less likely to return to prison.

‘Education Was My Saving Grace’

At 30 years old, Adam Gaunt realized his life was becoming a vicious cycle. 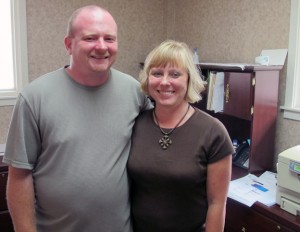 Adam Gaunt, 37, and his fiancée Vicki Bowman pose for a photograph in the office where Adam is working this summer. They plan to marry next year. After five years in prison, Gaunt is completing a bachelors degree at Indiana State University in Terre Haute.

“I’m sure there’s a lot of people out there that would say, ‘Lock ‘em away and throw away the key.’ But like I say, almost everyone’s going to get out again someday, and I think the best thing they can do is get some kind of education.”
—Adam Gaunt, Indiana State University student

He’d gotten out of prison in Arizona in 2004, moved home to Indiana, but didn’t shake his old ways — he was into drinking, drugs, “partying” — and ultimately landed in the Allen County lockup in February 2006 after a bar fight.

“It was that first night in jail,” Gaunt, now 37, remembers. “I got to thinking, ‘I’ve got to change my life, I’ve got to do something different, because what I’m doing isn’t working.’”

Not long after he arrived at Putnamville Correctional Facility, Gaunt — who had a high school education and never really thought about college — signed up for the Correctional Education Program.

At the time, the initiative enrolled more than 2,400 offenders, making it one of the largest programs of its kind in the nation.

“Indiana has been a really quiet leader,” says Rebecca Ginsburg, director of the Education Justice Project at the University of Illinois-Champaign. “They’re known in the world of correctional education as being a very effective leader.”

Gaunt hasn’t looked back. By December 2009, he had earned his associates degree from Indiana State University. He moved to a minimum security facility shortly thereafter. Earning the diploma shaved a year off Gaunt’s sentence. He got out of prison in August 2010.

“I’m 37 years old, and other than my daughter, this is the best thing that’s ever happened to me,” Gaunt says. “I really credit the changing of my life to education.”

A provision in the 2011 budget bill blocked prisoners from receiving state education grants. As a result, the programs shrank this past school year. The Department of Corrections and participating schools focused on ensuring the offenders who were close to completion finished their degrees.

The cuts have also cost university employees their jobs. At Ball State University, the program once employed more than 100 part-time adjunct instructors. Fewer than 25 instructors were with the program this school year.

Indiana State had similar staff losses, with their program employing 69 instructors in 2010-11, the final full school year for the program. 19 ISU instructors remained this school year.

A recent study found fewer than one in 20 Indiana prisoners had a college credential when they were released — barely half had a high school-level education.

“We’ve got an inmate population that has infinite needs when it comes to education. The state has finite resources,” says John Nally, director of education at the Indiana Department of Corrections.

Nally says the state will now focus on the job-training and vocational programs the prisons offer. He points to certification programs ranging from welding to commercial truck driving, masonry and mining.

“If we’re not going to have to have access to $6-10 million” of state money, Nally says, “we can’t have broad programs that include bachelors degrees. But we can give people the opportunity to get employment that will at the same time give them the opportunity to open the door to college if they wish to go back.”

‘We Can Give Him All The Trades In The World’

In Indiana, more than half of all violent offenders released from state prisons in 2005 reoffended within five years. But only a quarter of those with post-secondary education returned to prison.

The state’s figures back up what research has long shown: offenders who can get jobs when they get out are much less likely to reoffend. The best way to ensure they get jobs is to offer some kind of post-secondary education in prison.

“Whether that is a vocational program or certificate or an associates degree, I don’t think it really matters,” says Michelle Cooper, president of the Institute for Higher Education Policy. “I think what really matters for us is the outcome, which is having a contributing member to their families and to society.”

“Indiana has been a really quiet leader. They’re known in the world of correctional education as being a very effective leader.”
—Rebecca Ginsburg, Education Justice Project

“We can give him all the trades in the world, even those that have a trade when the guy comes in. If a guy comes in an he’s a roofer, what are we gonna do, make him an auto mechanic? The guy already knows a trade,” Hawkins says.

“But can we get him to go out,” Hawkins continues, “make him think correctly to where he’ll work for his living” and not reoffend?

“I’m sure there’s a lot of people out there that would say, ‘Lock ‘em away and throw away the key.’ But like I say, almost everyone’s going to get out again someday, and I think the best thing they can do is get some kind of education,” Gaunt says.

Gaunt has been out of prison for nearly two years, and by most accounts, things are going well. He’s finishing his bachelors at Indiana State and has been recognized by administrators for his success. He’s landed an internship. He’s gotten engaged.

But Gaunt can’t help but be nervous for the future. He’s been turned down more than a dozen times for employment in Terre Haute, even with an ISU Dean as a reference.

For college-educated ex-prisoners in Indiana, the unemployment rate is 30 percent.

“They talk about paying your debt to society. I honestly believe that my debt won’t be paid until I pass away, because I’m still paying for it,” Gaunt says.