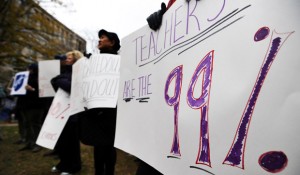 Teachers join an Occupy DC demonstration in Washington on November 17.

Many teachers are unhappy with their jobs right now. That shouldn’t come as a shock, but a recent nationwide survey from the MetLife Foundation just confirmed this sentiment.

What is surprising about the survey’s results, however, is how much teachers’ job satisfaction has plummeted in just the past three years.

And if you’re thinking the numbers are primarily a result of merit pay, increased accountability or teacher union-oriented laws, the survey’s authors suggest there’s much more to the story. 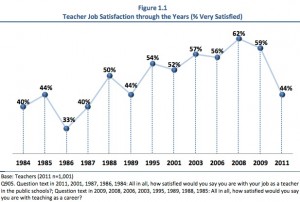 Teacher job satisfaction since 1984, according to a survey from the MetLife Foundation and Harris Interactive. Click on the image to enlarge.

The percentage of teachers in the poll who feel “very satisfied” with their jobs has dropped 15 points since 2009 — from 59 percent to 44 percent in 2011 — the largest decline in the survey’s 28-year history.

Why the big drop now? The down economy, the report’s authors conclude. To paraphrase:

Those who conducted the survey also say the teachers who aren’t satisfied with their jobs are more likely to feel their professional expertise is not respected in the community.

Even through the implementation of No Child Left Behind, which was controversial from its inception in 2001, teacher satisfaction numbers in the MetLife survey inched upward. Just four years ago, more than 62 percent of teachers reported feeling very satisfied with their jobs — an all-time high.

But Kevin Welner guest-blogs at The Answer Sheet that, while the economy played a role, it’s hard to overlook recent changes to education policy:

Teachers see states and districts implement policies that largely base their performance evaluations on student test scores. These new policies are layered on top of No Child Left Behind and the subsequent years of narrowed curricula and teaching to the test. Teachers have been watching sadly as the sort of engaging learning that attracted them to the profession is increasingly squeezed out. Further, teachers in many states are facing attacks on their collective voice in education policy by anti-union governors such as Walker (Wisconsin), Scott (Florida), Christie (New Jersey), Daniels (Indiana), Kasich (Ohio), and Brewer (Arizona).

The MetLife survey’s directors acknowledge teachers have often been the focus of criticism and heightened media scrutiny.

“They show readiness to embrace higher standards and accountability with support, but are concerned that their voices are not adequately heard in the policy debate,” the report’s authors write.

As Emily Richmond blogs at The Educated Reporter, more research about teacher attitudes on recent policy changes will be necessary:

Given the tidal wave of reform enveloping public education, it will be interesting to see what happens to the teacher job satisfaction numbers in the coming years. There’s a national conversation underway about teacher tenure, and nearly half the states and the District of Columbia are already overhauling their teacher evaluation processes so that they are tied more directly to student testing data. Those changes aren’t likely to boost the percentage of teachers who say they feel secure about their jobs.

“We’re in the midst of a real culture shift in the teaching profession as we move to emphasize teacher effectiveness,” said Sandi Jacobs, vice president of the National Council on Teacher Quality, a nonpartisan advocacy organization. “Change is hard, and it can really make teachers uncomfortable.”

She suggested future MetLife educator surveys include questions about current reform measures, such as district and state-level changes to evaluation models and policies. To not go there next, Jacobs said, “would really seem like a missed opportunity.”

How do you react to these numbers? How can they be turned around? And do you think teachers’ misgivings are justified?