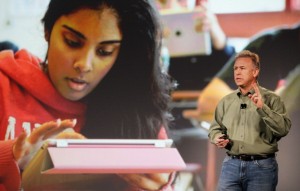 It’s possible the iPad can make a difference in schools for even the youngest of learners, a new study finds. From Apple tech blog TUAW:

A study of kindergarteners in Auburn, Maine has shown that students who use iPads score better in every literacy test than those who don’t. The study focused on 266 children whose instruction featured the iPad. Those who used the device scored higher on the literacy tests, were more interested in learning and excited to be there.

This is the latest set numbers suggesting iPads are immensely useful learning tools. But similar studies have been criticized in the past.

Take the Houghton Mifflin Harcourt-funded study of an iPad initiative in a California algebra classroom. As MindShift wrote:

But education blogger David Wees took issue with a few points in Houghton Mifflin Harcourt study. Was it the iPad that made the difference, or simply good teaching, Wees wondered? To summarize his post at 21st Century Educator:

Some Indiana school districts are already embracing the use of tablet computers in their classrooms. The Indiana Department of Education is subsidizing six districts who are trying out tablet technology as part of a $4.3 million innovation grant program announced in April 2011. Other districts are using iPads and netbook computers in classrooms without state help.

John Keller, assistant superintendent for technology at the Indiana Department of Education, has said state officials want to make sure Indiana schools are taking “smart risks” with education technology, like tablets and educational apps.

“People are sort of leaving behind the discussion whether or not we should have technology [in classrooms] and focusing on the question of ‘how?’ How will these tools inside the school and inside the learning context be put to good use, not just a doing these things differently, but doing different things?” Keller told StateImpact in October.

Mike Muir, who works for the Auburn, Maine, school district profiled in the latest study, echoed this sentiment. He spoke to Jim Dalrymple on the Apple blog The Loop.

“The objective has to be learning, not just getting the technology out there. We are paying attention to app selection and focused on continuous improvement — we aren’t just handing equipment to teachers,” Muir told The Loop.

What do you think of the use of iPads in the classroom? Are iPads simply a cool gadget? Or a transformational learning tool?