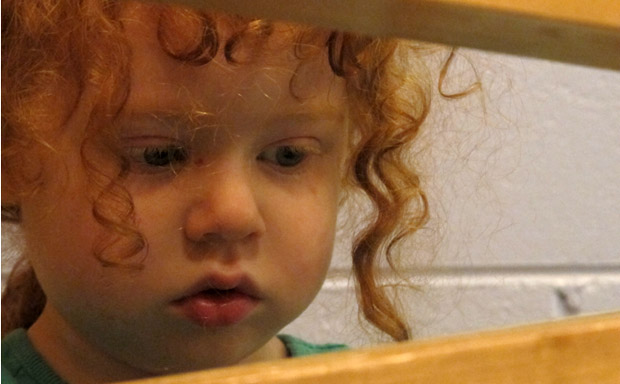 Maisy Yost plays in the nursery of a Goshen church while her mother attends an autism support group. Maisy, 3, was diagnosed with autism this year, and hasn't developed normal language skills yet.

Brenda Yost says her daughter is very smart. It’s just that Maisy, 3, isn’t able to tell anyone yet.

Still lacking basic language skills, Maisy’s doctors — who held off diagnosing her at age 1 or 2 — recently diagnosed her with autism.

Though Maisy’s now old enough to qualify for services in the public schools, Brenda says getting help for her daughter has been a challenge. Brenda’s dealing with waiting lists for Maisy’s therapies and potentially huge insurance costs, even with her doctor’s diagnosis in-hand.

That’s why Brenda Yost worries about changes to the official definition of autism set to be published next year.

“We are struggling by the skin of our teeth right now. The families that I work with are desperate.”
—Christine Guth, leader of the Asperger Autism Group of Goshen

A panel of experts at the American Psychiatric Association have been drafting the changes for the past decade. Once formally published next year, the revised definition will likely reduce the number of people who can receive a formal diagnosis for autism. The question Brenda — and thousands of others in the autism community — are asking is, ‘How much narrower will the new definition be?’

“The changes scare us because we’re just getting services now. What’s going to happen? I don’t know. We’re fighting for what we have now and it’s not enough,” Yost says.

The revisions to the autism definition in the Diagnostic and Statistical Manual, or “DSM,” will undoubtedly affect the more than the $102 million Indiana spent for autism services in the state’s schools.

Experts have a wide range of opinions on how the change to the DSM will affect that funding. What’s clear, though, is that parents and autism advocates are scared the change will mean the funding will go away.

Are We ‘Defining People Out Of Services’?

Autism is a disorder that hinders the typical growth of communication and social skills. The term has broadened to refer to an array of different developmental delays.

The “autism spectrum” now includes conditions such as Asperger syndrome, in which language skills develop more normally. It also includes the diagnosis of Pervasive Developmental Disorder – Not Otherwise Specified, or “PDD-NOS.” This label is often given to a person who meets some, but not all, of the criteria for autism or Asperger’s, typically while showing signs of other developmental disorders as well.

The breadth of the spectrum has led to a spike in diagnoses of the disorder. The number of kids in Indiana schools with autism has tripled over the past decade to more than 12,200 students.

The proposed changes will eliminate Asperger’s and PDD-NOS from the American Psychiatric Association’s definition altogether, replacing them in the manual with the broad label of “autism spectrum disorder.” Those in the PDD-NOS and Aspergers communities fear the change will narrow the spectrum enough that they will no longer keep their official diagnoses. If anything, a recent story in The New York Times has heightened those fears among advocates. 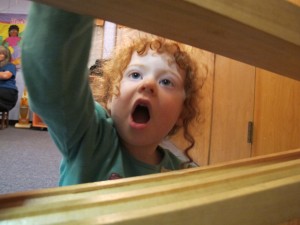 Maisy Yost, 3, plays with a marble set. Her mother Brenda says her doctors held off diagnosing Maisy with autism when she was younger, saying it was best to wait.

But Cathy Pratt, an expert on the autism spectrum who leads Indiana University’s Indiana Resource Center for Autism, is urging calm. She says the current criteria are too broad, and must be narrowed somewhat — but that doesn’t mean broad swaths of people who need help won’t be able to get it.

“Folks come to us with multiple disabilities and dual diagnoses, so [the APA’s autism working group] is just trying to clean up the reality,” Pratt says, adding, “I hope we will be diligent to make sure we don’t leave people out of services who need services. But right now what the DSM is doing is just trying to tighten up the definition, so that those folks who were on the fringe, maybe, get diagnosed into a different category.”

If the autism spectrum does shrink significantly, Pratt says it’s likely many who would lose the autism label would still get services for learning disabilities, anxiety, or obsessive compulsive disorder.

‘The Label Brings The Money’ To Schools

Christine Guth runs an autism support group in Goshen. She says, despite the breadth of the definition, parents still run into many obstacles when trying to obtain services.

“I am in touch with lots of families who are having trouble even with the diagnosis they have now. They’re having trouble getting services for their child. They say, ‘Oh well your child’s passing the ISTEP, so they don’t need services.’ I think that’s really shortsighted” Guth says.

“Whatever happens with this definition, the thing we need to be really diligent about is to make sure that services don’t go away, that they don’t diminish, that the services are available.”
— Cathy Pratt, director, IU’s Indiana Resource Center for Autism

Guth emphasizes parents need the support of professionals and educators who can recognize deficits in a child with autism and effectively treat those deficits.

For example, Guth says some children with autism spectrum disorders cannot see the merits of personal hygiene or wearing unwrinkled clothing. Others have trouble grasping how to make telephone calls or make the bus on time. Trained professionals can intervene — and the earlier the better.

In the schools, getting that help often means getting a second diagnosis from school staff. Elkhart Community Schools autism coordinator Roma Osterloo says parents have learned the autism label often means extra help for their students. She wonders how changes to the criteria needed to get that label could affect school funding.

Osterloo says the schools have made more opportunities available to help students with various needs that don’t require a formal diagnosis or label. That said, districts are under financial strain, and the potential for losing that money could make providing more services for more students difficult if they don’t obtain a diagnosis for another diagnosis.

“We don’t have to have as [many services] anymore that we’ve got to have the diagnosis, the laws are going back to ‘Well, if a child’s failing, what is the school doing to help that child?’ Unfortunately, there’s no money. The state wants us to do all these things, but we’re cutting back on funding more and more,” Osterloo says.

For Maisy, Brenda Yost figures the long-term prognosis is “probably okay,” but that doesn’t make thinking about Maisy’s future any easier.

You grieve. Like you would for the death, a death. You know? The death of a child that you think you’re gonna have.